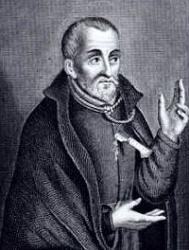 Campion, Thomas, born c. 1567, d. 1619, and buried at St. Dunstan's in the West, London, March 1, 1619. He was a physician, poet, and musician, but his reputation rests mainly on his poetical works. These include various Masques performed before James I. and other noble personages. Of these some rare copies are in the British Museum. His Observations in the Art of English Pœsie, &c, was published in 1602, and his New Way of Making four parts in Counter-point, &c, 1620. Of his poems, five are given by Palgrave in his Treasury of Sacred Song, 1889. His connection with hymnody is very slight, and nothing by him is now in common use. --John Julian, Dictionary of Hymnology, New Supplement (1907)  Go to person page >
^ top