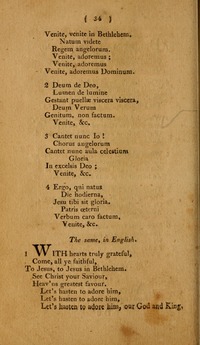 John Francis Wade (b. England, c. 1711; d. Douay, France, 1786) is now generally recognized as both author and composer of the hymn "Adeste fideles," originally written in Latin in four stanzas. The earliest manuscript signed by Wade is dated about 1743. By the early nineteenth century, however, four additional stanzas had been added by other writers. A Roman Catholic, Wade apparently moved to France because of discrimination against Roman Catholics in eighteenth-century England—especially so after the Jacobite Rebellion of 1745. He taught music at an English college in Douay and hand copied and sold chant music for use in the chapels of wealthy families. Wade's copied manuscripts were published as Cantus Diversi pro Dominicis et Festis p… Go to person page >
^ top

Adeste fideles laeti triumphantes. [Christmas.] As to the authorship and actual date of this hymn nothing positive is known. It has been ascribed to St. Bonaventura, but is found in no edition of his Works. Most probably it is a hymn of the 17th or 18th century, and of French or German authorship. The text appears in three forms. The first is in 8 stanzas, the second, that in use in France, and the third the English use, both in Latin and English. The full text [is] from Thesaurus Animae Christianae, Mechlin, N.D. (where it is given as a second sequence for Christmas and said to be "Ex Graduali Cisterciensi"….

Translations not in common use:—
7. With hearts truly grateful. Psalms & Hymns. Washington, 1830. 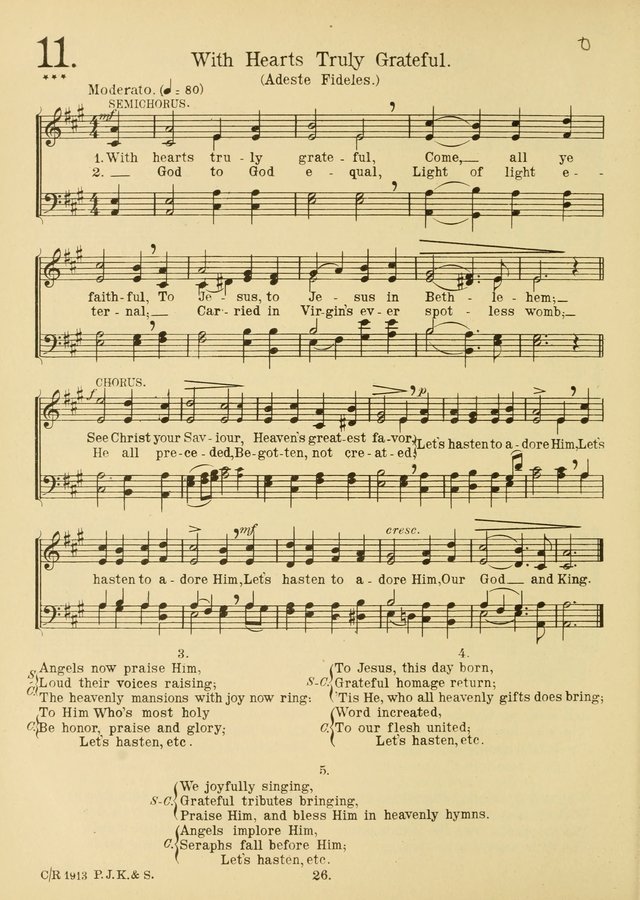 A Collection of Psalms, Hymns, Anthems, &c. to Which is Added the Rosary of the Blessed Virgin #d43

Hymns, for the Use of the Catholic Church in the United States of America (New ed.) #34

Manual of Select Catholic Hymns and Devotions for the Use of Schools, Colleges, Academies and Congregations. Rev. #d127

The Catholic Harp #68b