The Death of Jesus Christ, Our Lord

The death of Jesus Christ, our Lord,
We celebrate with one accord;
It is our comfort in distress,
Our heart's sweet joy and happiness.

Various forms of GOTTLOB are found in a number of collections of old German melodies. One form of the tune appeared in Johann G. Wagner's Sammlung alter und neuer (1742) with the burial hymn "Gottlob, es geht nunmehr zum Ende" ("Thanks Be to God; My End Is Near Me"). Although only the first line of this variant vaguely resembles the harmonization by Johann S. Bach (PHH 7) in the Psalter Hymnal, some scholars think it is the source for Bach's setting published posthumously in the second edition of his Choralgesangbuch (1769). Other scholars think Bach found another source, and still others think he composed the tune himself.

Like many German chorales, this tune is a bar form (AAB). Its superb melody is finely matched by Bach's harmonization, which invites four-part singing. A moderate tempo helps to underline the cheerful hope of this text.

Text: The Death of Jesus Christ, Our Lord 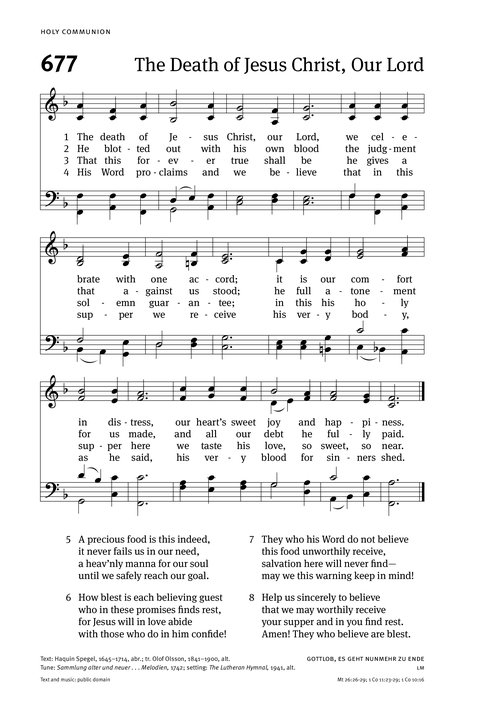