Christ Shall Have Dominion

We Are in Christ Jesus

All texts published with KING OF GLORY (Piersma)^ top

Albert Piersma (b. Friesland, the Netherlands, 1901; d. Grand Rapids, MI, 1960) composed KING OF GLORY in 1933 as a setting for Caroline M. Noel's "At the Name of Jesus" (467), which has "King of Glory" in its final stanza–thus the tune's title. The tune was published with Noel's text in the 1934 and 1959 editions of the Psalter Hymnal. Piersma lived in Grandville, Michigan, where he worked for the Kindle Bed Furniture Company. He was the senior organist of Grandville Avenue Christian Reformed Church for over thirty years. In addition to hymn tunes, Piersma wrote several poems, which were published in The Banner.

KING OF GLORY is a stately tune that builds to a solid climax in its final line. Sing the first three stanzas in parts but sing in unison on stanza 4. That stanza also needs a descant; if the accompanist cannot compose one, try having the sopranos sing the tenor line an octave higher. Use your best mixture or reed stop on the organ. For festive occasions add brass instruments.

Text: Christ Shall Have Dominion
^ top 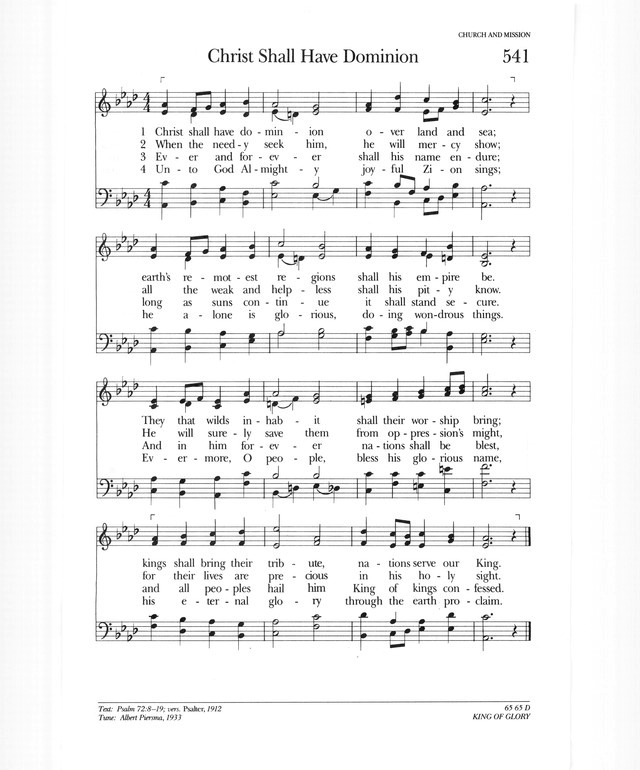