Elkanah Kelsey Dare (1782-1826) was born in New Jersey but moved to Lancaster County, Pennsylvania sometime before 1818. He was a Methodist minister and very possibly the music editor for John Wyeth’s Repository of Sacred Music, Part Second (1813), a shaped-note collection that includes more than a dozen of his tunes. Emily Brink Go to person page >
^ top

MORNING SONG is a folk tune that has some resemblance to the traditional English tune for "Old King Cole." The tune appeared anonymously in Part II of John Wyeth's (PHH 486) Repository of Sacred Music (1813). In 1816 it was credited to "Mr. Dean," which some scholars believe was a misprinted reference to Elkanah K. Dare, a composer who contributed more than a dozen tunes to Wyeth's Repository. In the original harmonization the melody was in the tenor. The tune is also known as CONSOLATION (and KENTUCKY HARMONY), its title in Ananias Davisson's Kentucky Harmony (1816), where it was set to Isaac Watts' morning song, "Once More, My Soul, the Rising Day."

Text: The Ballad of the Cross

Text: A Ballad of Wise Men

Text: Out From The Rising Of The Sun
^ top 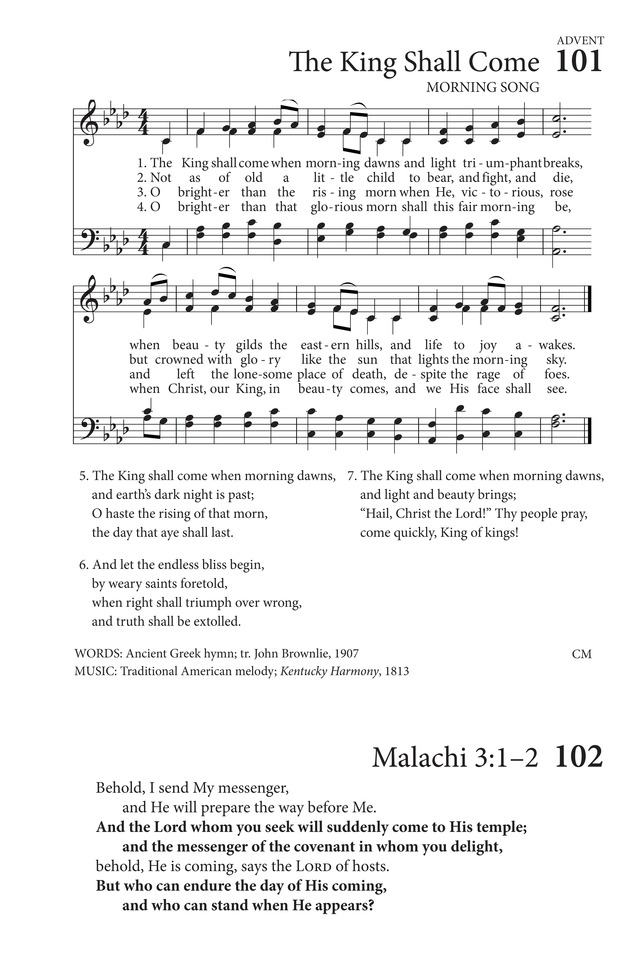 For the Living of These Days #19

Hymns for a Pilgrim People #441

Psalms for All Seasons #9C

Psalms for All Seasons #107A

Psalms for All Seasons #130E

The Psalter for Christian Worship #7

Include 20 pre-1979 instances
All instances^ top
Suggestions or corrections? Contact us