Be Thou My Vision

Be thou my vision, O Lord of my heart

1 Be thou my vision, O Lord of my heart;
naught be all else to me, save that thou art--
thou my best thought by day or by night,
waking or sleeping, thy presence my light.


2 Be thou my wisdom, and thou my true word;
I ever with thee and thou with me, Lord;
thou my great Father, I thy true son;
thou in me dwelling, and I with thee one.


3 Be thou my battle shield, sword for my fight;
be thou my dignity, thou my delight,
thou my soul's shelter, thou my high tow'r:
raise thou me heav'n-ward, O Pow'r of my pow'r.


4 Riches I heed not, nor man’s empty praise,
thou mine inheritance, now and always:
thou and thou only, first in my heart,
High King of heaven, my treasure thou art.


5 High King of heaven, my victory won,
may I reach heaven's joys, O bright heav'n's Sun!
Heart of my own heart, whatever befall,
still be my vision, O Ruler of all.

SLANE is an old Irish folk tune associated with the ballad "With My Love on the Road" in Patrick W. Joyce's Old Irish Folk Music and Songs (1909). It became a hymn tune when it was arranged by David Evans (PHH 285) and set to the Irish hymn "Be Thou My Vision" published in the Church Hymnary (1927).…

All tunes published with 'Be Thou My Vision'^ top

According to mythology, when St. Patrick was a missionary in Ireland in the 5th century, King Logaire of Tara decreed that no one was allowed to light any fires until a pagan festival was begun by the lighting of a fire on Slane Hill. In a move of defiance against this pagan ritual, St. Patrick did light a fire, and, rather than execute him, the king was so impressed by his devotion that he let Patrick continue his missionary work. Three centuries later, a monk named Dallan Forgaill wrote the Irish poem, “Rop tú mo Baile” ("Be Thou my Vision), to remember and honor the faith of St. Patrick. Forgaill was martyred by pirates, but his poetry lived on as a part of the Irish monastic tradition for centuries until, in the early 20th century, Mary Elizabeth Byrne translated the poem into English, and in 1912, Eleanor Hull versified the text into what is now a well-loved hymn and prayer that at every moment of our lives, God would be our vision above all else.

Eleanor Hull’s versification consists of five verses. Today, most hymnals include four of those verses: 1, 2, 4, and 5, leaving out verse 3: “Be thou my breastplate, my sword for the fight; be thou my dignity, though my delight, thou my soul’s shelter, and thou my high tower: raise thou me heavenward, O Power of my power."

Other minor changes include altering some of the gender exclusive language to be inclusive, or changing “High king” in stanzas three and four to “Great God.”

There’s only one tune associated with this text, and that’s SLANE, aptly named for the location at which St. Patrick is said to have defied the orders of King Logaire. This tune comes from an Irish folk song of the same name, and was combined with the hymn text by Welsh composer David Evans in the 1927 edition of the Church Hymnary of the Church of Scotland.

This is a hymn that has been performed and recorded by too many artists to count, but that provides the worship leader with a lot of options for arranging. Many artists keep the traditional Irish feel to the tune, and sing it at a slower pace – just be careful it doesn’t drag. Here are some good arrangement options:

This hymn acts as a prayer to our God that He would be the first that we seek after, and continually refocus the direction of our life. This hymn can be sung throughout the liturgical year, and is a particularly powerful prayer of response to God’s call for our lives, whether heard in a sermon or a Scripture passage. It is most often used as a hymn of dedication, and fits well during a time of profession of faith or baptism. Consider using this verse from William Cowper’s hymn “O for a Closer Walk with God” as a prayer before or after: "The dearest idol I have known, Whate’er that idol be, Help me to tear it from thy throne, And worship only thee." Other songs of dedication could be well paired with this hymn, such as "I Surrender," "Take My Life," and "Take, O Take Me as I Am." 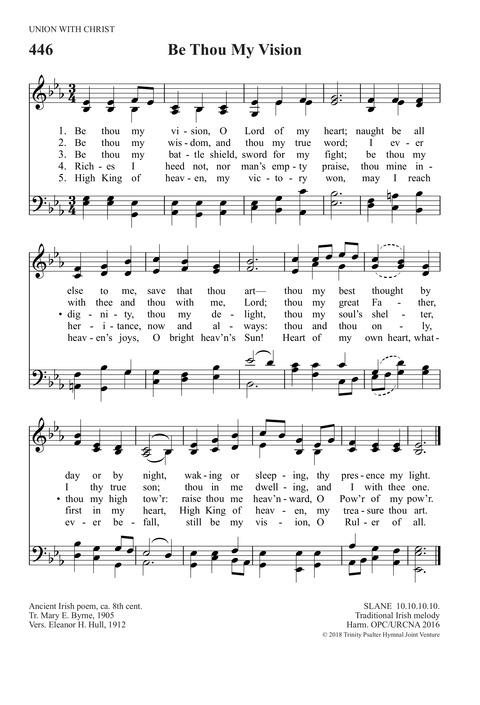 Hymns for a Pilgrim People #353

Display Title: Be Thou My Vision First Line: Be thou my vision, O Lord of my heart Tune Title: [Be Thou my vision] Author: Mary E. Byrne; Eleanor H. Hull Date: 2006 Source: Irish hymn, 8th cent.
Sing With Me #161

The Book of Hymns (A fresh anthology of favourite hymns) #31

Display Title: Be Thou My Vision First Line: Be Thou my Vision, O Lord of my heart Date: 2012
The Family Hymnal #10

The Hymnal for Worship and Celebration #382