1. How Blest Are They Who, Fearing God 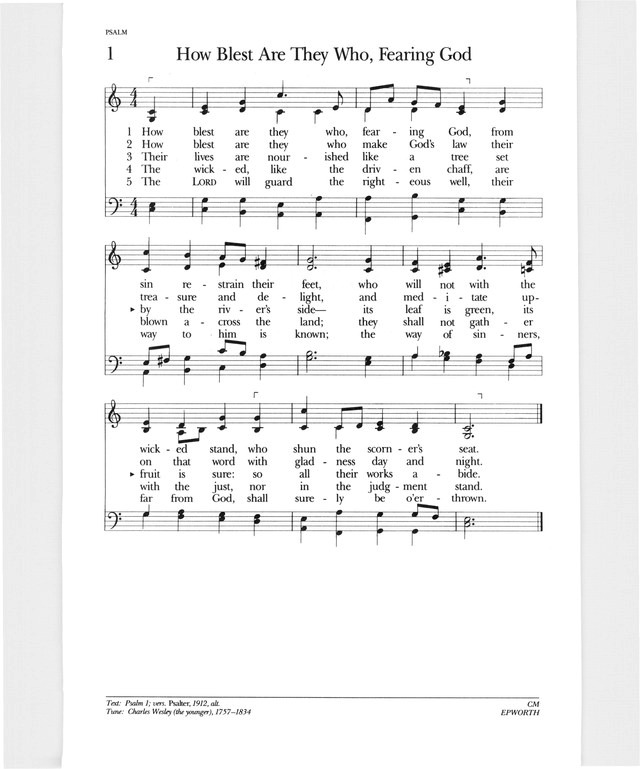 1 How blest are they who, fearing God,
from sin restrain their feet,
who will not with the wicked stand,
who shun the scorner's seat.


2 How blest are they who make God's law
their treasure and delight,
and meditate upon that word
with gladness day and night.


3 Their lives are nourished like a tree
set by the river's side
its leaf is green, its fruit is sure:
so all their works abide.


4 The wicked, like the driven chaff,
are blown across the land;
they shall not gather with the just,
nor in the judgment stand.


5 The LORD will guard the righteous well,
their way to him is known;
the way of sinners, far from God,
shall surely be o'erthrown.

A sharp contrast between the lot of the righteous and of the wicked.

Psalm 1, the first of the "wisdom" psalms, directs all who enter the book of Psalms to the appropriate way to serve and worship God. In the tradition of the teachers of wisdom (also found in 34, 37, 49, 73, 112, and throughout Proverbs), this psalm sharply contrasts the results of righteousness with those of wickedness. Psalm 1 declares the blessedness of the righteous, who shun the counsel and company of the wicked (st. 1) and who meditatively review God's law (st. 2). While the righteous are blessedly secure, fruitful, and prosperous in all they do (st. 3), the wicked are as wind-blown chaff, excluded from the LORD's congregation and unable to stand in the place of judgment (st. 4). The LORD watches over the way chosen by the righteous, but the way of the wicked comes to nothing (st. 6). These two "ways" lead to such contrasting conditions not by chance or some natural law but because God is active in human affairs to protect and bless the one and denounce the other. The versification is from the 1912 Psalter, slightly altered and cast in plural rather than singular pronouns.

Liturgical Use:
Many occasions in Christian worship, especially with the liturgical reading of the law, and before or after sermons devoted to Christian wisdom themes.

EPWORTH was composed by Charles Wesley, Jr. (b. Bristol, England, 1757; d. Marylebone, London, 1834), and was published posthumously under the tune name LOUGHTEN in the third part (1838) of Novello's The Psalmist. The heading there reads "Charles Wesley, arr. S. Wesley," which means that Charles's more musically accomplished brother Samuel prepared the harmonization. EPWORTH is named for Epworth in Lincolnshire, the birthplace of both John and Charles Wesley. Smooth movement in the second and third phrases complements the dramatic melodic leaps in the first and last phrases. The reflective text calls for a moderate tempo, played legato.

The Wesley brothers who composed this music were sons of the famous Methodist hymn writer Charles Wesley (PHH 267). The family was very musical, and young Charles and his brother Samuel gave private concerts at their home. Charles was a child prodigy who played the harpsichord at the age of three, although his father did not allow him to become a chorister at the Chapel Royal and discouraged him from becoming a professional musician. Charles did study organ, however, and became an accomplished organist, first at the Lock Hospital (1797-1802) and later at the Marylebone Parish Church (1817-1834). He composed some hymn tunes, anthems, voluntaries, concertos, and string quartets, and edited a new edition of his uncle John Wesley's Sacred Harmony in 1822.

Samuel Wesley (b. Bristol, 1766; d. London, 1837) began composing and taking organ lessons at the age of six. He was known as the finest organist of his time and composed much church music. He was also very involved in a revival in England of the music of]. S. Bach. His son Samuel Sebastian Wesley was even more influential; for more information on the Wesley family, see PHH 206 and 267.