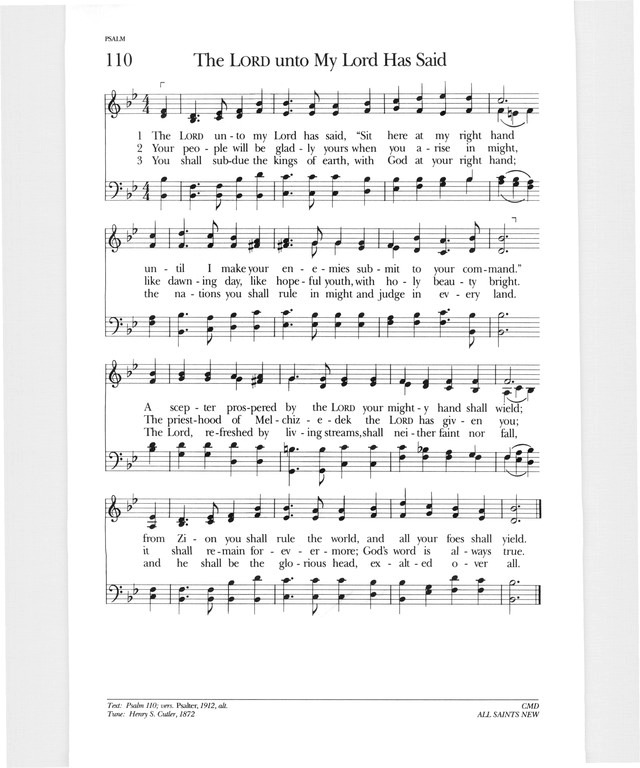 1 The LORD unto my Lord has said,
"Sit here at my right hand
until I make your enemies
submit to your command."
A scepter prospered by the LORD
your mighty hand shall wield;
from Zion you shall rule the world,
and all your foes shall yield.


2 Your people will be gladly yours
when you arise in might,
like dawning day, like hopeful youth,
with holy beauty bright.
The priesthood of Melchizedek
the LORD has given you;
it shall remain forevermore;
God's word is always true.


3 You shall subdue the kings of earth,
with God at your right hand;
the nations you shall rule in might
and judge in every land.
The Lord, refreshed by living streams,
shall neither faint nor fall,
and he shall be the glorious head,
exalted over all.

A proclamation of the sure triumph and unfailing reign of the LORD s anointed, the priest-king son of David.

Traditionally ascribed to David (Matt. 22:43-45), this was most likely a coronation psalm for the Davidic kings. The two authoritative words, or oracles, from God (vv. 1, 4) maybe echoes of the covenant made with David concerning his dynasty (2 Sam. 7; Ps. 89: 1-37). The first of these oracles proclaims the sure triumph of the LORD's anointed (st. 1) and the refreshing dedication of the king's servants. The second oracle proclaims the king's enduring priesthood "in the order of Melchizedek" (st. 2; see Heb. 5:6,10; 7:15-22)–perhaps because the king in Jerusalem was responsible for building and maintaining the temple, for overseeing the work of the priests and Levites there, and for interceding for the nations. This blessed king would rule all the nations, judge them, and know unfailing vigor in his exalted eternal reign (st. 3).

The New Testament uses Psalm 110 more than any other in reference to Jesus Christ as the anointed King filling this role. The versification (altered) is from the 1912 Psalter.

Henry Stephen Cutler (b. Boston, MA, 1824; d. Boston, 1902) composed ALL SAINTS NEW in 1872 for Reginald Heber's (PHH 249) text "The Son of God Goes Forth to War," and the two were published together in Hymnal with Tunes, Old and New (1872). That text refers to "the glorious band" of God's people, helping to explain the chosen tune title. The NEW is to distinguish this tune from others that are also called ALL SAINTS. ALL SAINTS NEW has a processional or martial character, inherited no doubt from Cutler's love for the British cathedral tradition of choir processions. Sing the tune in parts at a moderate tempo.

Cutler studied music in Frankfurt, Germany, in 1844. He moved to England, where he listened with interest to the cathedral choirs and came under the influence of the Oxford Movement. Returning to Boston in 1846, Cutler became organist of the Episcopal Church of the Advent and formed a choir of men and boys, to whom he introduced the wearing of liturgical robes. When he took a position at Trinity Church in New York City, he removed women from the choir and used the occasion of a visit by the Prince of Wales to the church to introduce his newly vested men and boys' choir. He also moved the choir from the gallery to the chancel and initiated the chanting of the psalms and the singing of part of the worship service. Cutler compiled The Psalter, with Chants (1858) and published The Trinity Psalter (1864) and Trinity Anthems (1865).