165. Send Out Your Light and Your Truth 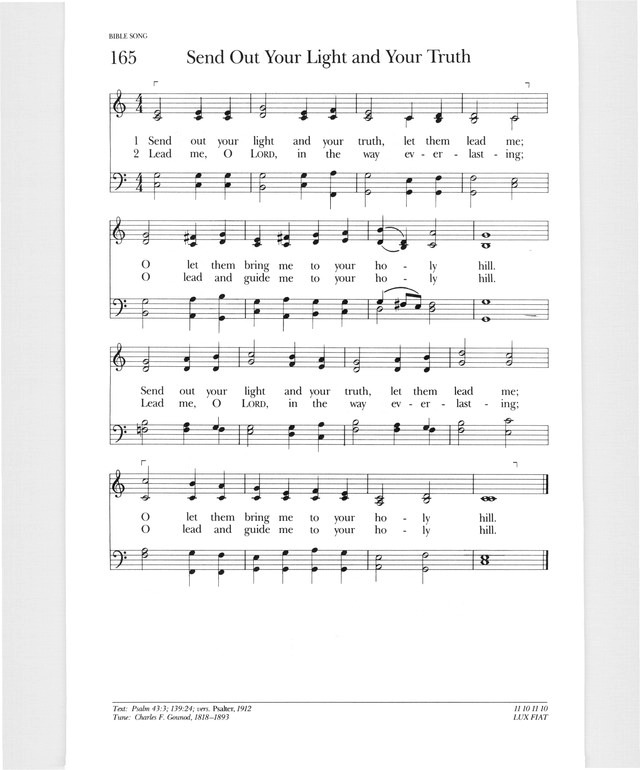 Liturgical Use:
As a sung prayer for illumination before the reading and exposition of Scripture, especially for Epiphany; many other occasions in Christian worship.

LUX FIAT is an excerpt from a choral work by Charles F. Gounod (b. Paris, France, 1818; d. St. Cloud, France, 1893), first published in his 1878 collection Chants Sacres. The tune has the characteristics of a twentieth-century Scripture chorus: short, simple, and effective if not overused. LUX FIAT was first combined with the text from Psalm 43 in the 1892 Episcopal Church Hymnal; in fact, the tune's title comes from the Latin phrasing of Psalm 43:3. The setting in the 1987 edition is abridged from earlier editions of the Psalter Hymnal. Do not rush in the singing of this fervent prayer; sing rather quietly, in harmony, perhaps without accompaniment.

Gounod was taught initially by his pianist mother. Later he studied at the Paris Conservatory, won the "Grand Prix de Rome" in 1839, and continued his musical training in Vienna, Berlin, and Leipzig. Though probably most famous for his opera Faust (1859) and other instrumental music (including his Meditation sur le Prelude de Bach, to which someone added the Ave Maria text for soprano solo), Gounod also composed church music-four Masses, three Requiems, and a Magnificat. His smaller works for church use were published as Chants Sacres. When he lived in England (1870-1875), Gounod became familiar with British cathedral music and served as conductor of what later became the Royal Choral Society.