456. We Plow the Fields and Scatter 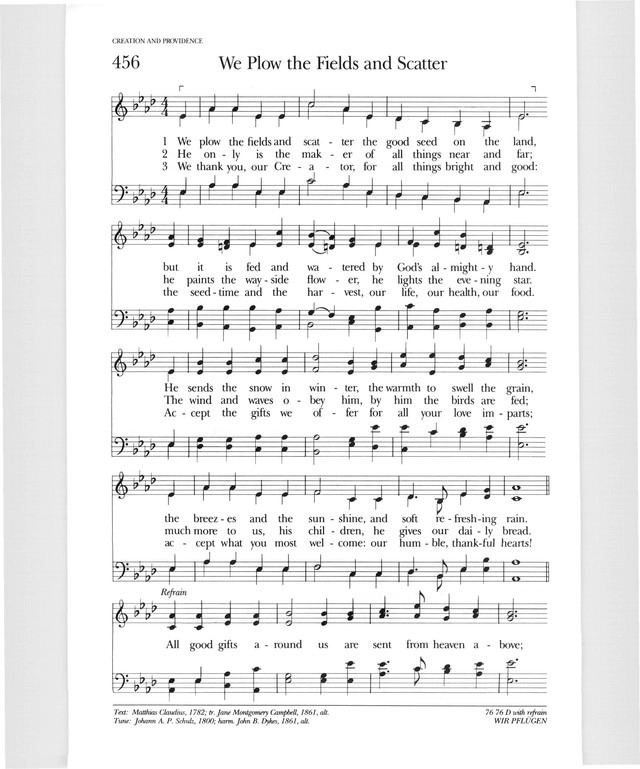 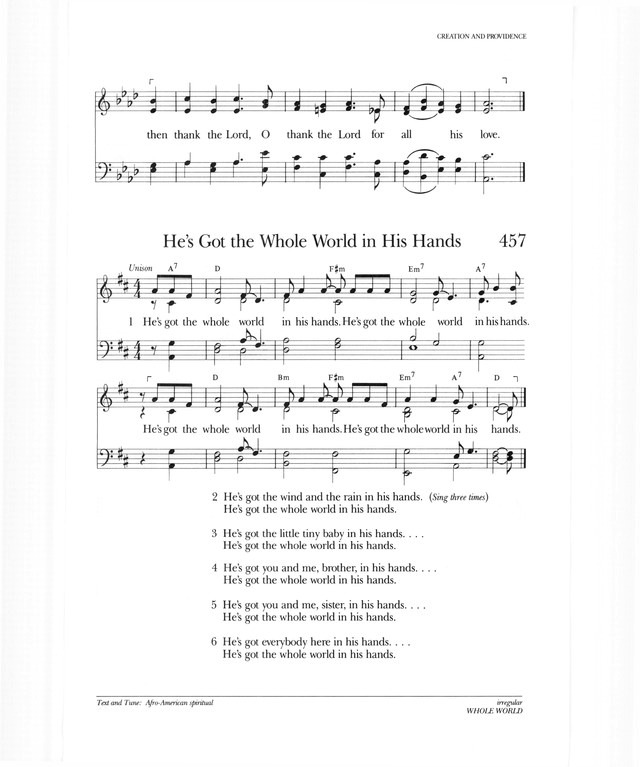 1 We plow the fields and scatter
the good seed on the land,
but it is fed and watered
by God's almighty hand.
He sends the snow in winter,
the warmth to swell the grain,
the breezes and the sunshine,
and soft refreshing rain.


2 He only is the maker
of all things near and far;
he paints the wayside flower,
he lights the evening star.
The wind and waves obey him,
by him the birds are fed;
much more to us, his children,
he gives our daily bread. Refrain


3 We thank you, our Creator,
for all things bright and good:
the seedtime and the harvest,
our life, our health, our food.
Accept the gifts we offer
for all your love imparts;
accept what you most welcome:
our humble, thankful hearts! Refrain

Matthias Claudius (b. Reinfeld, Holstein, Germany, 1740; d. Hamburg, Germany, 1815) grew up in the home of a Lutheran pastor and studied briefly for the ministry at the University of Jena. During his twenties and thirties he seems to have forsaken the faith, influenced by the rationalistic thought of the time. He became seriously ill in 1777, and this crisis was instrumental in returning him to his childhood faith. He worked briefly as commissioner of agriculture and manufacture of Hesse-Darmstadt (1776-1777) and in 1778 was appointed an auditor of the Schleswig-Holstein Bank in Altona. Most of his life was spent as a journalist, editor, and writer on general culture, much of it as editor of Der Wansbecker Bote (The Wansbeck Messenger).

Claudius also wrote many devotional poems, of which this is the only one in common use as hymn text. Originally a poem in seventeen stanzas with a refrain that began "Im Anfang war's auf Erden," the poem was the peasants' song in Claudius's sketch "Paul Erdmann's Feast," published in Asinus omnia sua secum portans (1782). It was popularized in various nineteenth-century German hymnals where it appeared with fewer stanzas, often beginning with Claudius's third stanza "Wir pflugen und wir streuen.”

The English text is based on Jane Montgomery-Campbell's free translation of his original stanzas 3, 5, 7,9, 10, and 13, first published in Charles S. Bere's A Garland of Songs (1861). Campbell (b. Paddington, London, England, 1817; d. Bovey Tracey, South Devon, England, 1878) was proficient in both music and German. She translated a number of German hymns into English, which were first published in Charles Bere's Garland of Songs, or an English Liederkranz (1862) and his Children's Chorale Book (1869). The writer of A Handbook for Singers (undated), Campbell also taught singing to the children in her parish school, St. James in Paddington, where her father was rector.

The text affirms that, while we need to plow the land and sow the seed, it is God who provides the increase; he sends the rain and the sunshine to produce a harvest. God also sustains his creation, for "all good gifts around us are sent from heaven above." Thus praise bursts from our "humble, thankful hearts."

Liturgical Use:
Harvest thanksgiving; as a hymn of creation; the final stanza as an offertory hymn.

WIR PFLÜGEN (named after the incipit of Schulz’s original third stanza) was published anonymously in the Hanover collection Lieder für Volksschulen (1800). But it was credited to Johann A. P. Schulz in Lindner’s Berlin songbook Jungenfreund (1812). The harmonization by John B. Dykes (PHH 147) was first published in the 1861 edition of Hymns Ancient and Modern.

The tune is noted for its opening phrase, which encompasses a very wide range, but that doesn’t appear to discourage most congregations from singing it. Sing the stanzas in unison (note that lines 1 and 4 are unison) and the refrain in harmony. Change the organ registration before stanza 3 to highlight the change of focus in the text: as we sing stanzas 1 and 2, we address each other, but in stanza 3 we address God.

Johann Abraham Peter Schulz (b. Lunebirg, Germany, 1747; d. Schwedt and der Oder, Germany, 1800) had a distinguished career in music, though his father wanted him to become a pastor. At the age of fifteen Schulz traveled to Berlin by himself to seek out a good music teacher. He persevered in his musical training under the composer and theorist Johann Philipp Kirnberger. Appointed accompanist and music teacher to the Polish princess Sophia Woiwodin in 1768, Schulz traveled all through Europe and was exposed to many different kinds of music. After1775 he had a number of prestigious positions, including director of the Royal French Theater in Berlin (1776-1780), director of music for Prince Henry of Prussia (1780-1787), and the director of the Royal Danish Theater (1787-1795). Schulz composed operas, instrumental works, church music, and song settings in a folk-music style, often setting the poems of great literary figures to music.