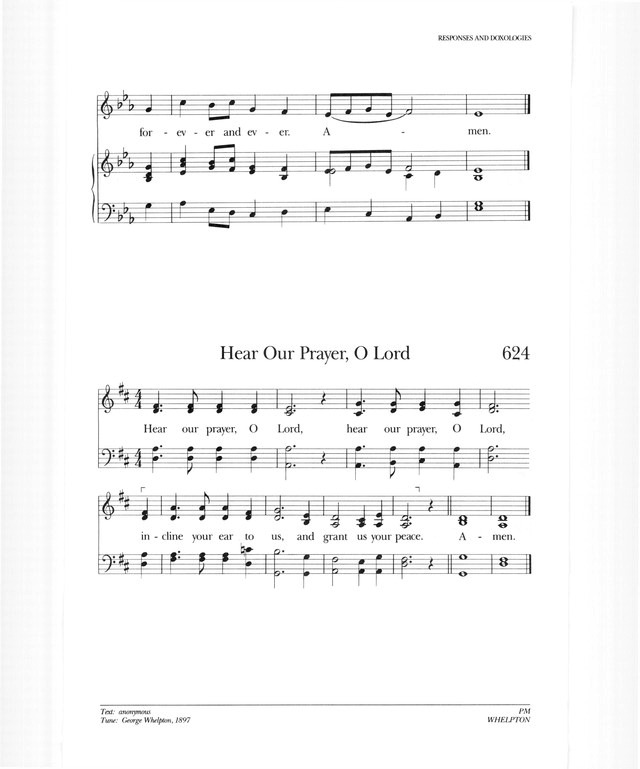 The text of this prayer response is derived from Psalm 143:1, "O Lord, hear my prayer, listen to my cry for mercy." Its final phrase, "grant us your peace," is taken from the conclusion of the ancient liturgical text Agnus Dei (see also 257) and is followed by an “Amen." Taken together, these two phrases constitute an urgent petition for the Lord God to hear our prayers and a confession of certainty that he will do so. Though there is no proof, it can be assumed that the composer of the tune, George Whelpton, chose these textual phrases when he composed this prayer chorus in 1897. The hymn was first published in leaflet form and later appeared in Hymns for American Youth (1924), compiled by H. Augustine Smith.

Liturgical Use:
As a conclusion to silent or congregational prayer; entirely or perhaps with only the first phrase repeated as a refrain/response in a litany.

George Whelpton (b. Redbourne, England, 1847; d. Oxford, OH, 1930) immigrated to the United States with his family in 1851. He enlisted in the Union army at the age of sixteen, serving as an assistant pharmacist during the Civil War. Educated at the Lake Chautauqua School of Music, he was a popular choir director in Buffalo, New York, for some twenty years. Whelpton moved to New York City in 1903 to become an editor for the Century Publishing Company. Among his editorial projects were Hymns of Worship and Service and The Church Hymnal. He joined the editorial staff of the A. Barnes Publishing Company in 1916 and served there until his retirement in 1925.

WHELPTON is a simple prayer response, ideally sung unaccompanied, in harmony, with a light registration on the organ.