93. The LORD is King, Enthroned 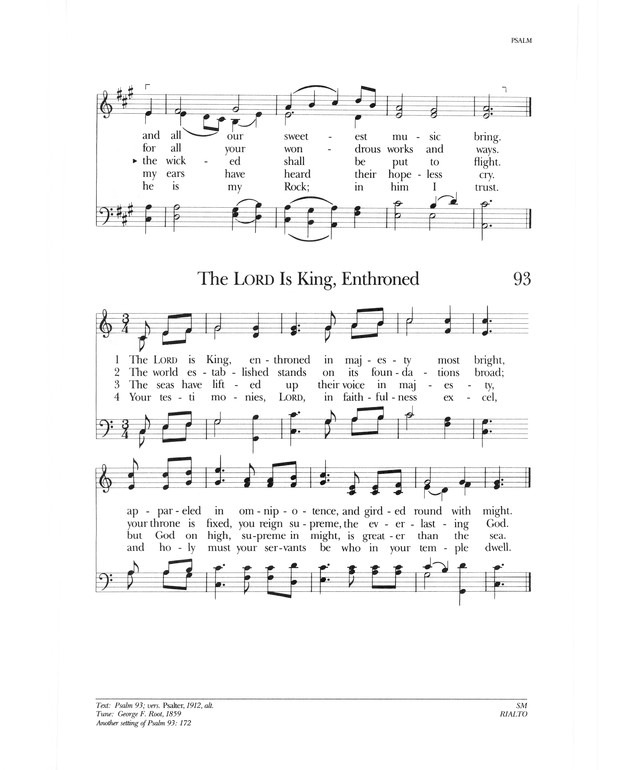 1 The LORD is King, enthroned
in majesty most bright,
appareled in omnipotence,
and girded round with might.


2 The world established stands
on its foundations broad;
your throne is fixed, you reign supreme,
the everlasting God.


3 The seas have lifted up
their voice in majesty,
but God on high, supreme in might,
is greater than the sea.


4 Your testimonies, LORD,
in faithfulness excel,
and holy must your servants be
who in your temple dwell.

A celebration of the mighty power by which the LORD keeps creation's order secure.

Psalm 93 is the most succinct of the cluster 92-100, all of which share the theme of the kingship of the LORD. This psalm was to be sung by the Levites in the liturgy of a high religious festival (perhaps the Feast of Tabernacles) celebrating the LORD's kingship over the whole world (st. 1). Because God has founded all creation, no chaotic power (such as the raging seas) can threaten or undo it (st. 2-3). Even God's moral order stands firm (st. 4). In the post-exilic liturgy of the temple, this psalm was sung at the time of the morning sacrifice on the sixth day of the week; Christians sing it to honor the reign of Christ. The versification (altered) is from the 1912 Psalter. Another setting of Psalm 93 is at 172.

Liturgical Use:
Ascension celebrations; many other occasions in Christian worship.

George Frederick Root (b. Sheffield, MA, 1820; d. Bailey's Island, ME, 1895), who is better known for his Civil War songs, composed RIALTO in 1859; the tune is named after an island and bridge in Venice and a theater district in New York City (where Root worked for some years). An energetic tune (with the half note as basic beat), RIALTO cries for full harmony singing and a full organ registration. Strive for two long lines.

A music educator and publisher, Root became acquainted with Lowell Mason (PHH 96) when he was Mason's aide at the Boston Academy of Music. Root moved to New York in 1844 to become a singing teacher at Abbott's School for Young Ladies and organist at Mercer Street Presbyterian Church. A well-known teacher, he taught at several schools, including Union Theological Seminary and the New York Institute for the Blind, where one of his students was Fanny Crosby (PHH 473).

Root went to Paris in 1850 to study piano and singing. Following his return to New York, he and William Bradbury (PHH 114) established the Normal Musical Institute, which was founded to instruct music teachers. He composed music for the Christy Minstrels under his German pseudonym, G. Friedrich Wurzel. In 1859 Root moved to Chicago to work with his brother at Root and Cady, Chicago's leading music publisher until the great fire of 1871. Thereafter he affiliated with the John Church Company in Cincinnati.

Deeply religious throughout his life, Root became a Swedenborgian in 1864. He composed over two hundred songs, including Civil War favorites such as "The Battle Cry of Freedom" and “Tramp, Tramp, Tramp, the Boys Are Marching.” He also compiled some seventy song collections and educational works about music. Nineteen of his hymn tunes were included in Gospel Hymns No. 1-6 Complete (1894).