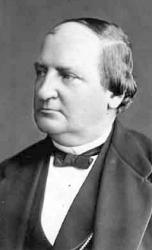 Franz Abt, born Dec. 21, 1819 at Eilenburg in the Prussian provinces of Saxony. His father was a musician and clergyman of the Lutheran Church. Franz studied music at Leipsic, and became known as a song-writer in 1838. In September, 1841, he married, and was leader of the orchesta at the Zuric theatre; became a teacher in 1842, but was litle known until his song "When the Swallows Homeward fly" carried his name to all parts of the civilized world. In 1865 was concert-master at Brunswick, and conducted the great festival at Dresden. He came to the United States in 1872, and was present at teh Peace Jubilee, Boston, where he directed the performance of some of his own music, arriving in New York May w, wher a testimonial concert was given for his benefit at Steinway Hall, May 18. He was received at Philadelphia by the German societies, with torch-light processions and cannonade, May 15, 1872.

Franz Wilhelm Abt (22 December 1819 – 31 March 1885) was a German composer and choral conductor. He composed roughly 3,000 individual works mostly in the area of vocal music. Several of his songs were at one time universally sung, and have obtained a more or less permanent place in the popular repertory. During his lifetime, Abt was a renowned choral conductor and he spent much of the last three decades of his life working as a guest conductor with choirs throughout Europe and in the United States.
Wikipedia Biography
TextsTunesHymnals