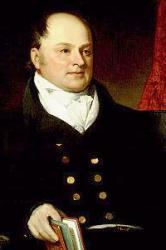 Adams, John Quincy. (Braintree, Mass., July 11, 1767-February 21, 1848, Washington, D.C.). Most of Adams' verse, both religious and secular, was written after he had left the Presidency. In his later years he composed a metrical version of the Psalms, best described as a free rendering in fairly good verse of what he felt was the essential idea of each Psalm. When his minister, William P. Lunt, of the First Parish, (Unitarian), Quincy, Mass., undertook the preparation of his hymn book The Christian Psalter, Mrs. Adams put the manuscript of her husband's metrical Psalms into Lunt's hands, and the latter included 17 of them in his book, and five other hymns by his distinguished parishioner.

The effect on Adams is recorded in a moving entry in his Journal which reveals an aspect of his character quite unknown to those who regarded him as an opinionated and uncompromising though sincere and upright politician. He wrote on June 29, 1845:

"Mr. Lunt preached this morning, Eccles. III, 1. For everything there is a season. He had given out as the first hymn to be sung the 138th of the Christian Psalter, his compilation and the hymn-book now used in our church. It was my version of the 65th Psalm; and no words can express the sensations with which I heard it sung. Were it possible to compress into one pulsation of the heart the pleasure which, in the whole period of my life, I have enjoyed in praise from the lips of mortal man, it would not weigh a straw to balance the ecstasy of delight which streamed from my eyes as the organ pealed and the choir of voices sung the praise of Almighty God from the soul of David, adapted to my native tongue by me. There was one drawback. In the printed book, the fifth line of the second stanza reads, "The morning's dawn, the evening's shade," and so it was sung, but the corresponding seventh line of the same stanza reads, "The fields from thee the rains receive," totally destroying the rhyme. I instantly saw that the fifth line should read, "The morning's dawn, the shades of eve," but whether this enormous blunder was committed by the copyist of the pressman I am left to conjecture."

After Adams' death his verses, both religious and secular, were published in a small volume entitled Poems of Religion and Society, New York, 1848, which ran to a fourth edition in 1854. This collection included the five hymns and 17 metrical Psalms printed in the Christian Psalmist, unchanged except that the opening line of each psalm has been substituted for the number of the psalm as its heading. Nor was the misprint which Adams lamented amended.

John Quincy Adams (/ˈkwɪnzi/; July 11, 1767 – February 23, 1848) was an American statesman who served as the sixth President of the United States from 1825 to 1829. He also served as a diplomat, a Senator and member of the House of Representatives. He was a member of the Federalist, Democratic-Republican, National Republican, and later Anti-Masonic and Whig parties.
Wikipedia Biography
TextsTunesHymnals