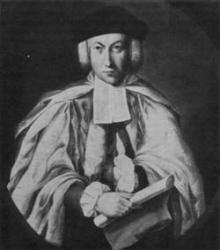 He was a pupil of John Stanley at St. Paul's Cathedral, and he earned a doctorate in music at the University of Oxford in 1766. Much detail of his life is included in his semi-autobiographical novel, The Life Of Miss Fanny Brown published under the pseudonym John Piper in 1771. He also held a position as private organist to the Earl of Donegall. He was:
Wikipedia Biography
TextsTunesHymnals