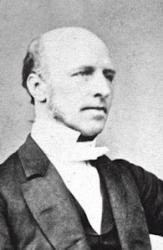 Of these versions of the Psalms, all of which date from 1874, the most popular is No. 3. Mr. Birks' compositions are worthy of greater attention than they have hitherto received.

Thomas Rawson Birks (28 September 1810 – 19 July 1883) was an English theologian and controversialist, who figured in the debate to try to resolve theology and science. He rose to be Knightbridge Professor of Moral Philosophy at the University of Cambridge. His discussions led to much controversy: in one book he proposed that stars cannot have planets as this would reduce the importance of Christ's appearance on this planet.
Wikipedia Biography
TextsTunesHymnals