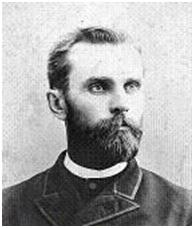 Jacob Whistler Byers was born on March 26, 1859 in Albany, Whiteside County, Illinois to Andrew and Nancy (Whistler) Byers. His father was a farmer and a minister of a small denomination known as the River Brethren. Jacob received a basic rural education and self-taught himself to become a teacher. He was converted at a Methodist revival meeting.

He and his wife, Jennie Shirk, were actively involved in the Brethren in Christ Church. They together began an evangelistic work in Illinois and Iowa over the next two years. In 1890 they felt that God was calling them to the Pacific coast. They opened an evangelistic mission in San Diego and also worked in Los Angeles and held tent meetings up the coast. In 1893 Byers wrote a book, the "The Grace of Healing" to describe his conversion.