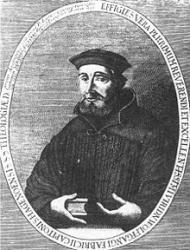 Capito, Wolfgang, son of Hans Köpfel or Kopphel, farrier and counsellor at Hagenau, in Alsace; was born at Hagenau in 1478. At Freiburg, in Breisgau, he studied medicine (M.D. in 1498); then law, and, after his father's death, theology. In 1512 he was appointed preacher at the Benedictine Collegiate Church of Bruchsal. He subsequently held important appointments at Basel, Mainz, and Strassburg. At Strassburg, under the influence of Zell and Bucer, he openly declared for the Reformation, became a freeman of Strassburg, July, 1523, and on Aug. 1, 1524, married the daughter of a Strassburg burgess. Working hand in hand with Bucer, he acted as mediator between the Zwinglians and the Lutherans, and after Zwingle's death he drew up for the Swiss churches a form of church government and worship. He died at Strassburg during the pestilence in the beginning of Nov. 1541 (Koch, ii. 94-101; Allg. Deutsche Biographie, iii. 772-775, the latter dating his birth 1472).
He was a good musician and a lover of poetry. Three hymns are known as by him, two of which are based on the Latin. The only one translated into English is noted under “Da pacem " (q.v.). [Rev. James Mearns, M.A.]