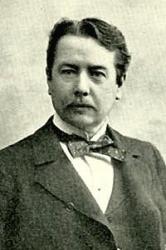 Born in Lowell, MA. on November 13, 1854, Chadwick studied organ with his older brother and used his earnings as an organist to finance the musical studies which his father opposed. After leaving high school in 1872, he clerked for a brief time in his father's insurance office while studying with Dudley Buck and Eugene Thayer at the New England Conservatory. Upon graduation in 1876 he accepted an appointment as a music instructor at Mt. Olivet College in Michigan and founded the Music Teachers National Association. In 1877 Chadwick embarked on the pilgrimage which was considered de rigeur for American musicians; he sailed for Germany to study in Leipzig and Munich with such famous pedagogues as Rheinberger. His RIP VAN WINKLE OVERTURE, composed abroad to an American theme, won him some early notice, and before returning to the States in 1880, he tasted a bit of the bohemian life by tramping the Continent with a group of avant garde artists and writers called the Duvenek Boys.

New England Conservatory
From 1877 to his appointment to the Directorship of the New England Conservatory in 1897, Chadwick built his career as a Boston teacher, organist, and composer. Among his celebrated pupils were Horatio Parker, who, in turn taught Charles Ives, Daniel Gregory Mason, and Frederick Shepherd Converse. Chadwick's compositional style has been dubbed "Boston Classicism." Though there is a distinct academic foundation to his music, his works also reflect a certain Yankee bluntness and retain the hints of his colorful vagabond days. In his mature period to which his powerful verismo opera, THE PADRONE, and his lyric drama, JUDITH, belong, Chadwick's music makes significant strides in freeing the American idiom from the German conservatory style. Sensitive, also, to indigenous influences, Chadwick made use of African-American song, Anglo-American psalmody, and folk idioms in his symphonic compositions. His 137 songs for solo voice and piano reflect a deep-seated interest in contemporary poetry in a Romantic vein. Among his best known settings are two cycles by Boston poet Arlo Bates: A FLOWER CYCLE and TOLD IN THE GATE.