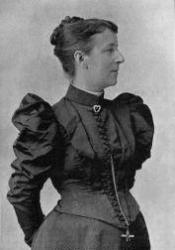 Chant, Laura Ormiston, née Dibdin, daughter of F. W. Dibdin, O.E., was bom at Woolastone, Gloucestershire, in 1848, was for some time Sister of the Sophia Wards of the London Hospital, and married to Thomas Chant, M.R.C.S., of Bridgewater, in 1877. Of Mrs. Chant's hymns, these are in common use:—
1. Beyond the far horizon. [Heaven.] Written at the request of Stopford A. Brooke for his Christian Hymns, 1891. It is also printed as a leaflet in 5 stanzas of 8 lines.
2. Light of the world, faint were our weary feet. [Christ the Light of the World.] Written in June, 1901, at the request of the Rev. S. Collier, Superintendent of the Central Wesleyan Mission in Manchester. As the hymn is regarded by many as an imitation of Cardinal Newman's "Lead, kindly light," &c, Mrs. Chant's account of its origin is worthy of attention:—
Mr. Collier "said how amazingly fond the rescued men were of the tune 'Sandon,' but that 'Lead, kindly light,' though so beautiful, was not an adequate expression of their feelings, and would I try and write something as tender, but gladder than Newman's lovely hymn. I did my best to express myself, and so gave what was wanted" The hymn was first printed as a broadsheet, and then passed into The Methodist Hymn Book, 1904, and other collections.
3. Silence, 0 earth, and listen to the song. [Spring.] This hymn is of more than usual excellence, and is worthy of attention. It is printed as a broadsheet, and may be had at Albemarle House, E. Twickenham.