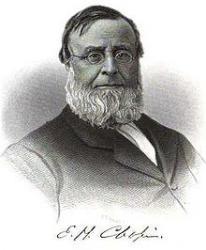 Chapin, Edwin Hubbell, D.D., was the most distinguished man of the Universalists in later years. In his early days he was eminent as a lecturer; and as a preacher until his death. He was born in Union village, Washington, N. Y., Dec. 29, 1814, and educated at Bennington, Vermont. He was successively pastor at Richmond, Virginia, 1837; Charleston, Mass.; Boston, 1846; and from 1848, of the Church of the Divine Paternity, New York city. He died Dec. 26, 1880. He published several works, and edited, with J. G. Adams, Hymns for Christian Devotion, Boston, 1846. This is perhaps the most prominent Universalist Collection in the States. To it Dr. Chapin contributed the following hymns:—
1. Amid surrounding gloom and waste. During a Storm.
2. Father, at this altar bending. Installation of a Pastor.
3. Father, lo, we consecrate. Opening of a Place of Worship.
4. Hark! hark! with harps of gold. Christmas.
5. O Thou who didst ordain the word. Ordination.
6. Our Father, God! not face to face. Opening of a Place of Worship.
7. When long the soul has slept in chains. Charitable Institutions.
Of these No. 6 is the most widely used. In addition Dr. Chapin is the author of:—
8. Now host with host assembling. Temperance. This was given in Longfellow and Johnson's Book of Hymns (Unitarian), 1848, and from thence has passed Into other collections. It is entitled "Triumph of Temperance." and is well known. [Rev. F. M. Bird, M.A.]