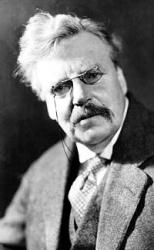 Chesterton, Gilbert Keith, son of Edward Chesterton, was b. May 29, 1874, at Campden Hill, Kensington. London; and is a well-known journalist and author, now (1906) residing at Battersea Park, London. He contributed to The English Hymnal, 1906, a vigorous lyric beginning, "O God of earth and altar"(Prayer for the Nation). [Rev. James Mearns, M.A.]

Gilbert Keith Chesterton was born in London, England on the 29th of May, 1874. Though he considered himself a mere "rollicking journalist," he was actually a prolific and gifted writer in virtually every area of literature. A man of strong opinions and enormously talented at defending them, his exuberant personality nevertheless allowed him to maintain warm friendships with people--such as George Bernard Shaw and H. G. Wells--with whom he vehemently disagreed.

Chesterton had no difficulty standing up for what he believed. He was one of the few journalists to oppose the Boer War. His 1922 Eugenics and Other Evils attacked what was at that time the most progressive of all ideas, the idea that the human race could and should breed a superior version of itself. In the Nazi experience, history demonstrated the wisdom of his once "reactionary" views. His poetry runs the gamut from the comic "The Logical Vegetarian" to dark and serious ballads.

Though not written for a scholarly audience, his biographies of authors and historical figures like Charles Dickens and St. Francis of Assisi often contain brilliant insights into their subjects. His "Father Brown" mystery stories, written between 1911 and 1936, are still being read and adapted for television.

His politics fitted with his deep distrust of concentrated wealth and power of any sort. Along with his friend Hilaire Belloc and in books like the 1910 What's Wrong with the World he advocated a view called "Distributism" that is best summed up by his expression that every man ought to be allowed to own "three acres and a cow." Though not known as a political thinker, his political influence has circled the world. Some see in him the father of the "small is beautiful" movement and a newspaper article by him is credited with provoking Gandhi to seek a "genuine" nationalism for India. Orthodoxy belongs to yet another area of literature at which Chesterton excelled. A fun-loving and gregarious man, he was nevertheless troubled in his adolescence by thoughts of suicide. In Christianity he found the answers to the dilemmas and paradoxes he saw in life. Other books in that same series include his 1905 Heretics and its sequel Orthodoxy and his 1925 The Everlasting Man.

Chesterton died on the 14th of June, 1936 in Beaconsfield, Buckinghamshire. During his life he published 69 books and at least another ten have been published after his death. Many of those books are still in print.

Gilbert Keith Chesterton KC*SG (29 May 1874 – 14 June 1936) was an English writer, philosopher, lay theologian, and literary and art critic. He has been referred to as the "prince of paradox". Time magazine observed of his writing style: "Whenever possible Chesterton made his points with popular sayings, proverbs, allegories—first carefully turning them inside out."
Wikipedia Biography
TextsTunesHymnals