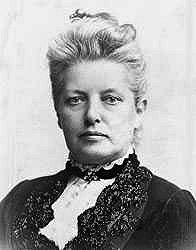 Mary Mapes Dodge is the often referred to as the "leader in juvenile literature" (Clarke, 1059), for she helped create and perpetuate the most widely circulated and read children's magazine during a time when American printing technology greatly improved and enabled the mass production of magazines and books. Dodge was born on January 26, 1831 in New York City. She grew up in a prominent family with two sisters. Her "own reminiscences were of 'a devoted father and mother and a happy childhood, a remarkably happy childhood, watched over with loving care'" (Gannon 3). Beginning in her early childhood, Dodge and her sisters were educated by a tutor in their home. Their father introduced them to a large variety of literature from the Bible to Shakespeare because at that time Dodge's father believed that children's literature was "a dreary wasteland" (Gannon 4). Dodge's early exposure to literature enabled her to develop a gift and appreciation for art, music, and writing. In her teenage years, Dodge could skillfully write and she assisted her father with his writings for pamphlets.

In 1851 Mary celebrated her marriage to William Dodge, and within the next 4 years, she gave birth to two sons, James and Harrington. The Dodge family confronted several hardships throughout their life together. In 1857, William faced serious financial difficulties concerning debts and the destruction of the company he worked for. During that same year, at the age of six, their son James was diagnosed with a fatal sinus disease. The effect of these disastrous events caused William to leave his family in 1858. He left for a walk from which he never returned. A month after his disappearance his body was found dead from an apparent drowning.

After the death of her husband, Mary was left in a bad financial position and with two sons to raise on her own. At this time, Mary "resolved 'to take up her life again in the old spirit of rejoicing; to rear and educate her boys as their father would have done; to do a man's work with the persistent application and faithfulness of a man, to gain a man's pay, yet to leave herself freedom and freshness to enter into all her children's interests and pursuits as their comrade and friend" (Gannon 7). Mary would not allow the unfortunate events of her husband's death and financial difficulty stand in her way from educating her sons and providing them with the life they deserved. In addition to educating her sons, she began writing and editing in 1859. Mary worked with her father to publish two magazines, the Working Farmer and the United States Journal. The editorial work she used for these magazines helped to shape her writing skills, which she later applied to edit the most successful children's magazine of her time.

Some of Mary's early writings before the publication of St. Nicholas include The Irvington Stories (1864) and Hans Brinker (1865). Hans Brinker is by far Dodge's most well known story, for it was published in several languages all over the world and this classic was considered "the best and most faithful juvenile story" (Clarke 1063). Four years after the publication and success of Hans Brinker, Dodge began working for a newspaper known as Hearth and Home." Dodge worked on the juvenile and household departments under the editorship of Harriet Beecher Stowe. Roswell Smith, one of the founders of the children's magazine Scribner's Monthly, observed Dodge's work at Hearth and Home. Smith considered Dodge for the editor of his newly created children's magazine, St. Nicholas, named for the patron saint for children. Dodge faced a difficult decision because she wanted to pursue novel writing and other challenging fields, but her heart remained with children. "Many gifted men and women were writing novels; no one was doing all that could be done--ought to be done--for the boys and girls" (Clarke 1063), and thus Dodge accepted the position of editor for St. Nicholas.

Dodge's goal for her children's magazine was to create literature that inspired and interested children. In 1873 she anonymously wrote for Scribner's Monthly,"a successful children's magazine "must not be a milk-and-water variety of the periodical for adults. In fact, it needs to be stronger, truer, bolder, more uncompromising than the other; its cheer must be the cheer of the bird-song; it must mean freshness and heartiness, life and joy" (Clarke 1063). Mary clearly illustrates here her intention for the path St. Nicholas. Mary hoped to portray the traditional values of society, to educate children, to provide enjoyable entertainment, and to prepare them for "life as it is" (Kelly 380).

Dodge took careful consideration for the layout of her magazine so she could fulfill her goals for a successful children's magazine. Two important obstacles confronted Dodge when she considered the type of articles to include in her magazine. The first problem she faced was how to entice her readers and maintain their attention. Dodge's technique to overcome this problem was the use of "regular departments" and "reader involvement" (Gordon, 380). The most famous regular department found in her magazine was 'Jack-in-the-Pulpit'. 'Jack-in-the-Pulpit' was "the inimitably wise and witty little preacher whose tiny discourses of the keenest sense and most inspiriting nonsense, . . . were a feast for the mind and souls of young folks every month" (Clarke 1065). Jack was a maternal type character that reflected Dodge's own personality. Dodge hoped to instill value and morals into the children without directly preaching to them. Jack provided an advantageous resource for accomplishing this goal because he was witty, humorous, and sincere. The children reading the story could easily identify with Jack's "preachings" and accept them because they were not directly aimed at the reader. In addition, Dodge added two more characters, Deacon Green and Little Schoolma'am, to provide authority figures and the introduction of new and interesting knowledge for the readers.

The second technique Dodge employed for her periodical was reader involvement. Dodge included two features, "The Puzzle Box" and "The Letter-Box." "The Puzzle Box" provided entertainment for the readers through riddles or games. The answers to these games, however, were not included in the issue of the magazine. Readers had to send their answers to the publisher for judging, and only then could they find out the true answers. "The Letter-Box" included letters written to Dodge from the readers. Publication for readers was not only included in this section, but Dodge also encouraged children to contribute their own literature to the magazine.

St. Nicholas became one the most successful magazines for children during the second half of the nineteenth century. Circulation increased to almost 70,000 children all over the U.S. The success of this periodical can be attributed to Dodge's dedication and the many contributors. Dodge's persistence in finding extraordinary talents such as Louisa May Alcott, Rudyard Kipling, President Theodore Roosevelt, F. Scott Fitzgerald, and Sarah Orne Jewett provided a variety of intellectual and artistic material for children every month. St. Nicholas' began in 1873 and continued for the next 30 years with a few publications after Dodge's death in 1905. Dodges dedication to children is clearly evident in the hard work she devoted to this magazine. Dodge is an inspirational women who set goals people thought impossible, but ones she was able to achieve. In a memoir written after Dodge's death in a St. Nicholas publication, Dodge is described as a woman who put her heart into her work and achieved the goals she put forth. "What she attempted, she performed. There was no emergency, great or small, to which she was not equal; there was no Hill of Difficulty" (Clarke 1064). She was a woman to be truly admired, for her thirty years of work dedicated to children has influenced the world of periodicals ever since.