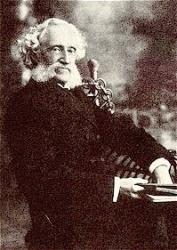 Luther Orlando Emerson was born at Parsonsfield, Maine, August 3, 1820. He descended from distinguished English ancestry. His parents were quite musical, and while the family circle were together, they had a choir and orchestra of their own. The father played the violoncello, the mother was an excellent singer, the flute and violin added their sweet tones, till the quiet homestead rang with melody.

Mr. Emerson's education was obtained at the district school, Parsonsfield Seminary and Effingham Academy. He was full of energy, quick and versatile, an apt scholar, and with a view to entering the profession of medicine he entered Dracut Academy, Mass. But his great love for music swerved him from that course, and now, having far better opportunities for cultivating and enjoying this taste and ability, he soon determined upon music as the profession of his choice. He accordingly commenced a course of musical instruction under the late I. B. Woodbury, then a popular teacher of music. After several years of study on the voice, piano, organ and in harmony, Mr. Emerson went to Salem, Mass., began teaching, and took charge of his first choir at a salary of one hundred dollars per year. Here he commenced the composition of music for his own choir, whiich was so popular with its members and the congregation, that Mr. Emerson was encouraged to seek a larger hearing by publishing a collection of church music. Among the tunes was that of Sessions, named after his pastor, which was destined to have a perennial popularity, and is often used in worship in the place of Old Hundred, for the Doxology. At the great Peace Jubilee it was received with applause when sung by a chorus of ten thousand voices, accompanied by an orchestra of two hundred instruments and a great pipe organ. The effect was sublime beyond expression.

In 1847 occurred the marriage of Mr. Emerson to Miss Mary Gore, daughter of a prominent Boston merchant. She was a lady of much musical taste and ability.

In 1853 he decided to make an effort to put his music before the public, and accordingly went to Boston in search of a publisher. Like most young and unknown authors, he met with but little encouragement, but finally found a publisher in the person of Mr. B. B. Muzzy. Thus was the Romberg Collection published. The book was not pushed — hence it found no market.

After a residence of eight years in Salem, Mr. Emerson removed to Boston, accepting the position of organist and musical director at the Bulfinch Street Church, then under the pastoral care of Rev. Wm. R. Alger, which he filled for four years. He eagerly improved the rare means of culture which were once more enjoyed, meanwhile teaching and composing music.

In 1857 he formed the connection with Oliver Ditson Company, of Boston, of author and publisher, which has continued to the present time with but one interruption (a single volume brought out by another firm), the Golden Wreath, which at once became popular, and sold forty thousand during the first year, this being the initial volume in the long series since brought out by these publishers. In 1858 came the Golden Harp, which was also a success. These successes gave him not only encouragement, but reputation.

Mr. Emerson now entered upon a career of usefulness and popularity for which he had been preparing during the years of self-denying struggle and discipline. He was called to take charge of the music in the Second Congregational Church, Greenfield, Mass., and also of the musical department of Power's Institute, at Bernardston. Amid nature's most beautiful surroundings, he had a quiet retreat for the pursuit of his true vocation, the composition of church music.

The first fruit of his genius here was the Sabbath Harmony, in 1860. This book was also a success. In 1863 followed the Harp of Judah, which had the remarkable sale of nearly fifty thousand copies in the first three months. This book probably gave Mr. Emerson his preeminence as a composer of church music, containing as it did his anthem, Guide Me, O Thou Great Jehovah, and many of his finest compositions.

Having declined the solicitations of Dr. Lowell Mason to become his associate in music, Mr. Emerson started forth on his own plans, and attained the highest rank among those who loved the pure and beautiful in song. Mr. W. S. B. Mathews, a musical critic, pronounces him the best melodist of all the psalmodic writers.

In 1866 the equally successful Jubilate appeared, followed by the Choral Tribute, the Standard and the Leader. In the last two Dr. I. R. Pahner was associated with him. Later on came the Salutation, Voice of Worship, Herald of Praise, etc. The diligence with which Mr. Emerson plied his pen can be estimated when one recalls the fact that he has made seventy-two collections of music, embracing music for churches, singing schools, public schools, choral societies and conventions, instruction books for voice, organ, etc. He has also composed and published scores of songs, quartets and instrumental pieces.

The great amount of work this represents can only be appreciated by those who have undertaken similar labors. Some years ago the degree of Doctor of Music was conferred upon Professor Emerson by the Faculty of Findlay College, Findlay, Ohio.

For many years past. Dr. Emerson has devoted his energies to the grand purpose of elevating the general character of music in our churches, and thus largely advancing the interests of true worship. He places great stress upon the mission of church music. He regards sacred music as the best expression of devotional feeling that exists. He looks upon sacred song as prayer, and believes that it inspires and intensifies prayer. With this view he has taken an active and prominent part in musical festivals and conventions, of which he has conducted over three hundred throughout the United States and Canada. As a conductor, he stands in the front rank. As a teacher. Dr. Emerson has an exceedingly happy faculty of imparting in a concise manner to his classes. His very pleasing address enables him to command the undivided attention of his pupils.

As a singer, he has always held high rank, and has sung much in public. His voice is a baritone of great compass, and quite powerful. As a lecturer upon music, Dr. Emerson has attracted much attention. His most popular lecture is entitled The World of Music, in which he traces its origin and progress, and gives some excellent traits of the lives of the great composers. In this lecture he also shows the design of music, and how it has been prized in every age of the world, among all nations — its power in the Church and State, and the need of its influence in the family — in joy and sorrow — for this life and the life to come.