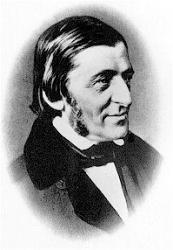 Emerson, Ralph Waldo, son of an Unitarian Minister, was born at Boston, U.S., May 25, 1803. He was educated for the Unitarian Ministry, and acted, 1829-32, as one of their ministers. Ultimately he left the ministry, and devoted himself to lecturing and literature. As a philosopher, essayist, and poet he rose to a distinguished position. He died at Concord, Massachusetts, April 27, 1882. His published works include Poems, 1846; Orations, Lectures, and Addresses, 1844; Representative Men, 1850; English Traits, 1856, &c. His hymns are not numerous.