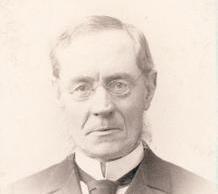 Everett, William. (Watertown, Massachusetts, October 10, 1839--February 16, 1910, Quincy, Massachusetts). Son of Hon. Edward Everett. He graduated from Harvard College in 1859; took the B.A. degree at Cambridge University, England, in 1863; and the degrees of A.M. and LL.B. at Harvard in 1865. He received the honorary degree of Litt.D. from Williams College in 1889 and the degree of LL.D. from the same in 1893, and from Dartmouth in 1901. After graduation from the Harvard Law School he did not enter the legal profession, but served the College as tutor and then Assistant Professor of Latin for several years. In 1872, the Boston Association of Ministers licensed him as a lay preacher and thereafter he spoke frequently in Unitarian pulpits in New England, abut he was never ordained as a settled minister. He served Adams Academy in Quincy, Massachusetts as headmaster from 1877 to 1907, with an interruption of two years when in 1893 he was elected a member of the House of Representatives in Washington. In 1866, The Christian Register printed his hymn beginning "Deal gently with us, Lord" and three years later he wrote "for the Unitarian Festival at the Music Hall [Boston], May 27, 1869" a hymn beginning "Almighty Father, Thou didst frame." These hymns, and four others by him, are included in Putnam's Singers and Songs, Etc..

William Everett (October 10, 1839 – February 16, 1910) was born in Watertown, Massachusetts, United States. He was the son of Charlotte Gray Brooks and orator, Massachusetts governor and U.S. Secretary of State Edward Everett, who spoke at Gettysburg, Pennsylvania before President Abraham Lincoln's address on November 19, 1863. Everett returned to his job as master of Adams Academy in 1897. He died on February 16, 1910 and was interred with his parents in Mount Auburn Cemetery in Cambridge, Massachusetts.
Wikipedia Biography
TextsTunesHymnals