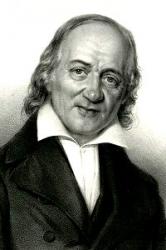 Rv Gottfried Wilhelm Fink PhD Germany 1783-1846. Born at Sulza, Thuringa, Germany, he was a German composer, music theorist, poet, and a protestant clergyman. From 1804-1808 he studied at the University of Leipzig, where he joined the Corps Lusatia, where he made his first attempts at composition and poetry. In 1811 he was appointed Vicar in Leipzig for some years, where he also founded an educational institution, leading it until 1829. Around 1800 he worked for the “Allgemeine musikalische Zeitschrift” (General musical mazazine). In 1827 he became the magazine's editor-in-chief for 15 years. From 1838 he was a lecturer at the University of Leipzig. In 1841 he became a Privatdozent of musicology at the university. That year he became a member of the Prussian Academy of Arts in Berlin, and a year later was appointed university Music Director. He was highly esteemed throughout his life as a music theorist and composer, receiving numberous honors and awards, both at home and abroad. The Faculty of Philosophy at Leipzig University awarded him an honorary doctorate. He wrote mostly Songs and ballads and collected songs as well. He authored important words on music theory and history, but was best known as editor of the “Musikalischer Hausschatz der Germans”, a collection of about 1000 songs and chants, as well as the “Deutsche Liedertafel” (German song board), a collection of polyphonic songs sung by men. He died at Leipzig, Saxony.