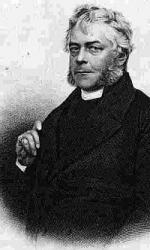 Ford, David Everard, son of a Congregational Minister at Long Melford, was born there on Sept. 13, 1797. He became pastor of the Congregational Church at Lymington, in Oct. 1821; Travelling Secretary to the Congregational Union in 1841; and pastor of Greengate Chapel, Salford, Manchester, in 1843. He died at Bedford, Oct. 23, 1875. Mr. Ford published several works including, Hymns chiefly on the Parables of Christ, 1828. From this is taken, (1) "Earthly joys no longer please us" (Heaven Anticipated). (2) "How vain is all beneath the skies" (Heaven Anticipated). These are in American common use. See Hymns of the Church, 1869, and Laudes Domini, 1884. Another of his hymns in common use from the same work, p. 107, is:—"Almighty Father, heavenly Friend" (Old and New Year). This is in Dale's English Hymn Book, 1874.