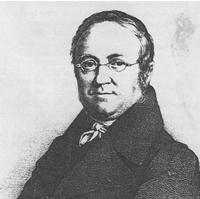 Naughty was the son of a watchmaker and organ builder. He visited here until his 13th Age of the school, then high school in Stuttgart and took lessons in music.

In 1806 he was teaching assistant in Degerloch while still in Stuttgart, studied music. In 1811 he went as a teaching assistant after Esslingen and in 1812 a music teacher at the newly established Esslinger teacher seminar. In 1820 he received the office of a municipal director of music and organist at the main church in Esslingen, where he remained until his retirement in 1860. His successor was Christian Fink.

Frech has composed six symphonies, many choral works, including 22 chorales for Württembergischen chorale books, 67 cantatas, an opera, the oratorio "Abraham on Moriah" and some organ works.

In the district of Stuttgart Kaltental a street was named after naughty.