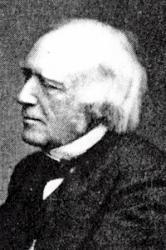 Furness, William Henry, D.D., born in Boston, 1802, and graduated at Harvard in Arts and Theology, 1820. From 1825 he has been an Unitarian Pastor in Philadelphia. He is an accomplished scholar, and has been an active worker in reforms of various kinds. His publications are numerous and
include a Manual of Domestic Worship, 1840, and a translation of Schiller's Song of the Bell.

His hymns are somewhat numerous, and several of them have great merit. The best and most widely used are:—
1. Father in heaven, to Thee my heart. Resignation. Appeared in The Christian Disciple, 1822. It was repeated in this form in some of the older collections, and a few modern hymnals, including the Boston Unitarian Hymns [& Tune] Book, 1868. In 1846 it was given in Longfellow and Johnson's Book of Hymns as "Father in heaven, to Whom our hearts;" again in their Hymns of the Spirit, 1864, and in Dr. Martineau's Hymns of Praise & Prayer, 1873. This hymn is sometimes ascribed to "H. Ware," but in error.
2. Feeble, helpless, how shall I? Jesus our Leader. First published in the Cheshire Unitarian Christian Hymns, 1844, No. 272, in 5 stanzas of 4 lines. It is in several modern collections, including Lyra Sacra Americana, 1868: Thring's Collection, 1882.
3. Have mercy, 0 Father. Divine direction desired. Contributed to Dr. Martineau's Hymns of Praise and Prayer, 1873, in 2 stanzas of 6 lines.
4. Here in a world of doubt. Psalms xlii. Contributed to the N. Y. Lutheran Collection, 1834, and repeated in his Manual of Domestic Worship, 1840, Martineau's Hymns, &c, 1873.
5. Here in the broken bread. Holy Communion. Appeared in the Appendix to the Philadelphia Unitarian Collection, 1828. It is in a few modern collections, including the Boston Unitarian Hymn [and Tune] Book, 1868.
6. Holy Father, Gracious art Thou. Purity & Peace. Contributed to Dr. Martineau's Hymns, &c, 1873, in 1 stanza of 12 lines.