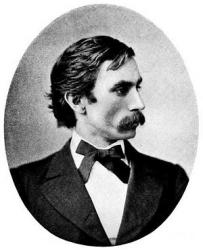 Gilder, Richard Watson, L.L.D. (February 8, 1844--November 18, 1909). Dr. Guilder's schooling began at his father's school for girls at Belle Vue, Bordentown, New Jersey, where he was the only boy enrolled. Details of his further education are vague, but the future editor began his journalistic work at the age of twelve or thirteen by publishing a paper of his own. He read law for a time before becoming a reporter on Newark, New Jersey, papers. In 1863, he joined a volunteer company of the Union Army, the First Philadelphia Artillery, but saw little actual combat service. Later he acted as paymaster for a railway company. He was a pioneer in magazine illustration beginning with his early association with Scribner's. Always a leader in plans for civic betterment, he was quite active through his late years; though in failing health he delivered a public lecture only two weeks before his death, which occurred at the home of a friend in New York City.

His real contribution to American literature was as editor of an excellent literary magazine rather than through his own writing. He was the recipient of many honorary degrees from various educational institutions.