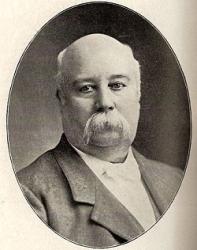 Henry Lake Gilmour United Kingdom 1836-1920. Born at Londonderry, Ireland, he emigrated to America as a teenager, thinking he wanted to learn navigation. When he reached the U.S., he arrived in Philadelphia and decided to seek his fortune in America. He started working as a painter, then served in the American Civil War, where he was captured and spent several months in Libby Prison, Richmond, VA. He married Letitia Pauline Howard in 1858. After the war he trained as a dentist and did that for many years. In 1869 he moved to Wenonah, NJ, and helped found the Methodist church there in 1885. He served as Sunday school superintendent and, for four decades, directed the choir at the Pittman Grove Camp Meeting, also working as song leader at camp meetings in Mountain Lake Park, MD, and Ridgeview Park, PA. He was an editor, author, and composer. He edited and/or published 25 gospel song books, along with John Sweney, J Lincoln Hall, John J Hood, Howard Entwistle, Joshua Gill, E L Hyde, Milton S Rees and William J Kirkpatrick. He died in Delair, NJ, after a buggy accident.