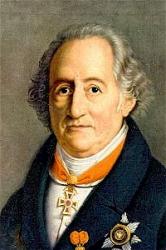 Goethe, Johann Wolfgang von, son of Johann Caspar Goethe, a lawyer at Frankfurt-am-Main; was born at Frankfurt Aug. 28,1749, and died at Weimar, March 22, 1832. The greatest German poet of his day, and one of the most famous literary men of his own or any age, his sympathies were Classical rather than distinctively Christian; and as he himself said (Conversations with Eckerman, January 4, 1827), he wrote no poems suited for use in public worship.
A few pieces, principally from his well-known dramatic poem of Faust (pt. i. 1808; pt. ii. pub. posthumously, 1832), are found under his name in one or two Unitarian hymn-books. Good translations of both parts of Faust have been published by Dr. John Anster, Bayard Taylor, Sir Theodore Martin, and others; while a very large number of other persons have published translations of the first part. No attempt has accordingly been made to notice any translations except those in the hymn-books.

i. From Faust, pt. i., 1808.
i. Christ ist erttanden! Freude dem Sterbliche. Easter. The chorus of angels on Easter Day. Translated as “Christ has arisen! Joy to our buried Head," by Dr. F. H. Hedge, in his Supplement to Hymns for the Church of Christ, Boston, U.S., 1853, No. 836. A free version is also noted under A. C. Cox, No. 4.
ii. Die Sonne tönt nach alter Weise. Praise. The Song of the three Archangels in the Prologue in Heaven. Translated as "The sun is still for ever sounding," by Dr. F. H. Hedge, as above, 1853, No. 190.
iii. Verlassen nab ich Feld und Auen. [Evening]. Faust's Soliloquy on entering his study with the dog, Translated as "O'er silent field and lonely lawn," as No. 21 in W. J. Fox's Hymns & Anthems, 1841, repeated in English and American Unitarian collections.

Goethe, J. W. von, p. 441, i. The Exeter Unitarian Hymns, Psalms and Anthems, of 1863 and 1884, contains the several additional hymns from Goethe, the translations in each case being by the Rev. T. W. Chignell. Some of the versions are very free, and the distinctively Christian character of the translations is only very faintly present in the originals. [Rev. James Mearns, M.A.]

Johann Wolfgang (von) Goethe (/ˈɡɜːrtə/; German: [ˈjoːhan ˈvɔlfɡaŋ ˈɡøːtə] ; 28 August 1749 – 22 March 1832) was a German writer and statesman. His body of work includes epic and lyric poetry written in a variety of metres and styles; prose and verse dramas; memoirs; an autobiography; literary and aesthetic criticism; treatises on botany, anatomy, and colour; and four novels. In addition, numerous literary and scientific fragments, more than 10,000 letters, and nearly 3,000 drawings by him exist.
Wikipedia Biography
TextsTunesHymnals