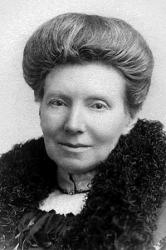 She was the youngest daughter of Tobias Porter, manager of John Alexander's flour mill in Belfast. Of her early life nothing is known; but in 1894 she became secretary of the YWCA in Swansea. She then served with the South Africa General Mission from 1897-1907, mostly in Port Elizabeth, Cape Town and Johannesburg, helping to found several branches of the YWCA.

With the chairman of the Mission and a fellow missionary she toured North America in 1906-7; her intended return to South Africa in November 1907 was cancelled in favour of marriage, on 17 December, to the chairman, Albert Alfred Head (1844-1928), a wealthy - and generous - insurance underwriter who had been widowed three years previously.

With her husband she continued actively to support both the SAGM and the Keswick Convention, with which the mission was closely associated. She was a frequent speaker for both organizations and a prolific contributor, in prose and in verse, to their publications.

A collection of her writings, Heavenly Places, & Other Messages, was published in 1920.

Invariably known as Bessie Porter before her marriage, she later styled herself Bessie Porter Head. After her husband's death in 1928 she moved into the SAGM house in Wimbledon, where she died.