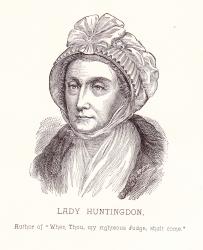 Selena Huntingdon, née Shirley, Countess of, daughter of Washington, Earl Ferrers, was born Aug. 24, 1707; married to Theophilus Hastings, 9th Earl of Huntindon, June, 1728; and d. in London, June 17, 1701. At an early age she received serious religious impressions, which continued with her, and ruled her conduct through life. She was a member of the first Methodist Society, in Fetter Lane, London, and the first Methodist Conference was held at her house in June, 1744. Her sympathies, however, were with the Calvinism of G. Whitefield, and when the breach took place between Whitefield and Wesley she joined the former. Her money was freely expended in chapel building, in the founding of Trevecca College, South Wales (now Cheshunt), and in the support of her preachers. A short time before her death the Connection which is known by her name was founded; and at her death it numbered more than sixty chapels. For use in these chapels she compiled A Select Collection of Hymns. Her own part in hymn-writing is most uncertain. The hymns, "Come, Thou Fount of every blessing," and "O when my righteous Judge shall come", have been specially claimed for her, but upon insufficient testimony. No mention of these hymns as being by her is made in her Life and Times, 1839. Miller says, "although the Countess was not much known as a hymn-writer, yet it is proved beyond doubt that she was the author of a few hymns of great excellence" (Singers & Songs, 1869, p. 183): but he neither names the hymns, nor submits the evidence. It is most uncertain that she ever wrote a hymn; and it is quite clear that upon reliable evidence not one has yet been ascertained to be of her composing. Her history and that of her Connexion are elaborately set forth in The Life and Times of Selina, Countess of Huntingdon, London, Painter, 1839.

Selina Hastings, Countess of Huntingdon (24 August 1707 – 17 June 1791) was an English religious leader who played a prominent part in the religious revival of the 18th century and the Methodist movement in England and Wales. She founded an evangelical branch in England and Sierra Leone, known as the Countess of Huntingdon's Connexion. A regular correspondent of George Whitefield and John Wesley, she is also remembered for her adversarial relationships with other Methodists.
Wikipedia Biography
TextsTunesHymnals