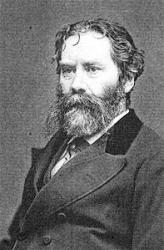 Lowell, James Russell, LL.D., was born at Cambridge, Massachusetts, February 22, 1819; graduated at Harvard College, 1838, and was called to the Bar in 1840. Professor of Modern Languages and Literature (succeeding the Poet Longfellow) in Harvard, 1855; American Minister to Spain, also to England in 1881. He was editor of the Atlantic Monthly, from 1857 to 1862; and of the North American Review from 1863 to 1872. Professor Lowell is the most intellectual of American poets, and first of her art critics and humorists. He has written much admirable moral and sacred poetry, but no hymns. One piece, “Men, whose boast it is that ye" (Against Slavery), is part of an Anti-Slavery poem, and in its present form is found in Hymns of the Spirit, 1864. Part of this is given in Songs for the Sanctuary, N.Y., 1865, as "They are slaves who will not choose.” [Rev. F. M. Bird, M.A.]

James Russell Lowell (/ˈloʊəl/; February 22, 1819 – August 12, 1891) was an American Romantic poet, critic, editor, and diplomat. He is associated with the fireside poets, a group of New England writers who were among the first American poets that rivaled the popularity of British poets. These writers usually used conventional forms and meters in their poetry, making them suitable for families entertaining at their fireside.
Wikipedia Biography
TextsTunesHymnals