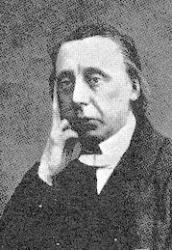 Lynch, Thomas Toke, was born at Dunmow, Essex, July 5, 1818, and educated at a school at Islington, in which he was afterwards an usher. For a few months he was a student at the Highbury Independent College; but withdrew, partly on account of failing health, and partly because his spirit was too free to submit to the routine of College life. From 1847 to 1849 he was Minister of a small charge at Highgate, and from 1849 to 1852 of a congregation in Mortimer Street, which subsequently migrated to Grafton Street, Fitzroy Square. From 1856 to 1859 he was laid aside by illness. In 1860 he resumed his ministry with his old congregation, in a room in Gower Street, where he remained until the opening of his new place of worship, in 1862, (Mornington Church), in Hampstead Road, London. He ministered there till his death, on the 9th of May, 1871.

The influence of Lynch's ministry was great, and reached far beyond his own congregation (which was never large), since it included many students from the Theological Colleges of London, and thoughtful men from other churches, who were attracted to him by the freshness and spirituality of his preaching. His prose works were numerous, beginning with Thoughts on a Day, 1844, and concluding with The Mornington Lecture, 1870. Several of his works were published after his death. His Memoir, by W. White, was published in 1874.

Lynch's hymns were published in:—
The Rivulet: a Contribution to Sacred Song, London., Longman, 1855, 2nd ed., 1856. This was enlarged by an addition of 67 hymns in 1868.
From the first edition of The Rivulet, 1855, the following hymns have come into common use:—
1. All faded is the glowing light. Second Advent.
2. Be Thy word with power fraught. Before Sermon.
3. Christ in His word draws near. Holy Scripture.
4. Dismiss me not Thy service, Lord. Work for Christ.
5. Gracious Spirit, dwell with me. Holy Spirit's presence desired.
6. How calmly the evening once more is descending. Evening. Sometimes "How calmly once more the night is descending."
7. I give myself to prayer. Prayer in Trouble.
8. Lord, on Thy returning day. Public Worship.
9. Lord, when in silent hours I muse. Resignation.
10. Love me, O Lord, forgivingly. Resignation.
11. Mountains by the darkness hidden. Resignation.
12. Now have we met that we may ask. Public Worship.
13. O, break my heart; but break it as a field. Penitence desired.
14. O Lord, Thou art not fickle. Sympathy.
15. O where is He that trod the sea. Christ Walking on the Sea.
16. Oft when of God we ask. Trust in Trial.
17. Rise, He calleth thee, arise. Blind Bartimaeus.
18. Say not, my soul, from whence. Resignation.
19. Where is thy God, my soul? Resignation and Hope.
There are also from the 1856 and 1868 eds. the following:—
20. A thousand years have come and gone. Christmas.
21. Lift up your heads, rejoice; (1856.) Advent.
22. Praying by the river side. Holy Baptism.
23. The Lord is rich and merciful. Have Faith in God.
24. There is purpose in this waste. Easter.
Lynch's hymns are marked by intense individuality, gracefulness and felicity of diction, picturesqueness, spiritual freshness, and the sadness of a powerful soul struggling with a weak and emaciated body. Although The Rivulet was published for use by his own congregation as a supplement to Watts, more than one half of the hymns were designed for private use only, but were not so distinguished in the work. Its publication caused one of the most bitter hymnological controversies known in the annals of modern Congregationalism. Time, however, and a criticism, broader and more just, have declared emphatically in favour of his hymns as valuable contributions to cultured sacred song. [Rev. W. Garrett Horder]