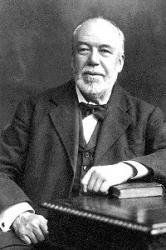 Mann graduated from New College, Oxford (MusB 1874, MusD 1882). He was a chorister and assistant organist at Norwich Cathedral, and after short stints playing the organ at St. Peter’s, Wolverhampton (1870); Tettenhall Parish Church (1871); and Beverley Minster (1875); he became the organist at King’s College Chapel, Cambridge (1876-1929), University Organist (1897-1929), and music master and organist at the Leys School, Cambridge (1894-1922). In addition to composing an oratorio and a number of hymn tunes, he was music editor of The Church of England Hymnal (1894).

Arthur Henry "Daddy" Mann (16 May 1850, Norwich – 19 November 1929, Cambridge) was an English organist and composer of hymn tunes including "Angel's Story" which was originally written for the hymn 'I love to hear the story', but is also sung to the words 'O Jesus, I have promised.' He was most noted for his role as organist and director of music at King's College Chapel, Cambridge from 1876 until 1929, being the founder director of the world famous tradition of the Festival of Nine Lessons and Carols since its first performance in 1918. In 1888, he published his own edition of Thomas Tallis's Spem in alium. His edition, though flawed, was the first publication ever made of Tallis's famous motet in forty parts.
Wikipedia Biography
TextsTunesHymnals