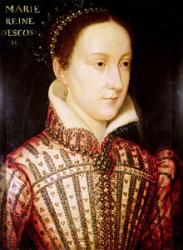 Scots, Mary Queen of (b. Dec. 8, 1542; d. Feb. 8, 1587). A metrical prayer in Latin:—
"0 Domine Deus! speravi in Te; 0 care mi Jesu! nunc libera me. In dura catena, in misera poena, desidero te; Languendo, gemendo, et genu flectendo, Adoro, imploro, ut liberes me" is given in several works including Julian Sharman's Poems of Mary, Queen of Scots, 1873, as the composition of the ill-fated Queen. It is said that it was written by her on the fly-leaf of her prayer-book (Horae in laudem B. M. Virgin) the night before her execution. This book—or at any rate what is regarded as such—is in the library of Stonyhurst College, Lancashire. It has been examined for the purposes of this Dictionary. The Prayer is not therein, nor is there any evidence of any portion of the book having been torn away. This fact raises a grave doubt as to its authorship which we are unable to settle. The Praye has been translated by several persons, including J. Fawcett, 1782, J. W. Hewett, 1859, p. 145, &c.

Mary, Queen of Scots (8 December 1542 – 8 February 1587), also known as Mary Stuart or Mary I of Scotland, reigned over Scotland from 14 December 1542 to 24 July 1567. Mary, the only surviving legitimate child of King James V of Scotland, was six days old when her father died and she acceded to the throne. She spent most of her childhood in France while Scotland was ruled by regents, and in 1558, she married the Dauphin of France, Francis. He ascended the French throne as King Francis II in 1559, and Mary briefly became queen consort of France, until his death in December 1560. Widowed, Mary returned to Scotland, arriving in Leith on 19 August 1561. Four years later, she married her first cousin, Henry Stuart, Lord Darnley, but their union was unhappy. In February 1567, his residence was d
Wikipedia Biography
TextsTunesHymnals