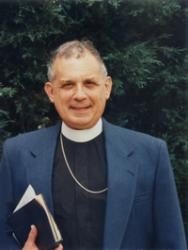 Dr. Dwyn Mounger, was an erudite, energetic and engaging personality with an impressive knowledge of religious history.

His preaching was considered well organized, thorough, interesting, and varied; he told stories and gave analogies. He wrote and acted out sermons in verse. He grew up in Mississippi, the son of a Presbyterian minister who was a leader in the Mississippi civil rights movement in the 1960's. He was a world traveler; he led tours in Scotland, England, Ireland, the Netherlands, Switzerland, East Germany, Czechoslovakia, Hungary, Egypt, Israel, China, and France. He incorporated his experiences into his theology. He is an excellent writer. He is author of the words for Hymn #239 in the new church hymnal and of a sermon published in Harper & Row's collection of the best sermons of 1989. He and his wife Kay, an elementary school teacher, have a daughter Misty and son Mack.

Dr. Mounger has a B.A. degree in history and philosophy from Bellhaven College, an M.S. degree in history from Mississippi State University, B.D. and M.Div. degrees from Princeton Theological Seminary, and a Ph.D. degree in American religious history from Union Theological Seminary in New York City. He was a professor of religion at Peace College (a small women's liberal arts college in Raleigh, North Carolina, affiliated with the Presbyterian Church) for three years (filling a position previously held by Boo Farrior -- the first of two times he followed her), an organizing pastor for a small church, and a pastor for 17 years of three multi-staff churches ranging in size from 550 to 750 members.

For most of his ministry, he regularly led services of worship in state prisons in Georgia, North Carolina, and South Carolina. He continued this practice while at the Oak Ridge church. He conducted services with the help of our church parishioners at Brushy Mountain State Penitentiary and Morgan County Prison. He opposed the death penalty and expressed his opinion on this matter in church sermons and newspaper articles.