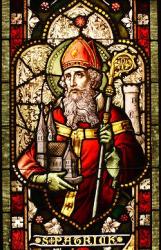 Patrick, St., the 2nd Bishop and Patron Saint of Ireland, was the son of Calpurnius, a deacon, and grandson of Potitus, a presbyter, and great grandson of Odissus, a deacon, was born most probably near Dumbarton, in North Britain, in 372. According to his epistle to Coroticus, his father was also a decurio, a member of the local town council, and a Roman by descent. Hence probably the name Patricius. St. Patrick alludes in Coroticus, § 5, to his having been originally a freeman, and of noble birth. His birthplace is termed in his Confession, § 1, Bannavem Taberniæ. Some have identified that place with Boulogne-sur-Mer, in France. His mother's name was Concessa, said to have been sister of St. Martin of Tours. According to Tirechan's Collections (circa A.D. 690), Patrick had four names—-(1) Magonus, which Tirechan explains by clarus, illustrious; (2) Sucat (Succetus), god of war, or brave in war, said to have been his baptismal name; (3) Patricius; and (4) Cothraige (Cothrighe), given because he had been a slave to four masters. At the age of 16 he was carried off with many others to Ireland, and sold as a slave. There he remained six years with Milcho, or Miliuc. He was engaged in feeding cattle (pecora), though the later writers say that he fed swine. In his captivity he became acquainted with the Irish language. His misfortunes were the means of leading him to Christ, and be devoted himself to prayer, and often frequented, for that purpose, the woods on Mount Slemish. Having escaped after six years, he spent some years with his parents, and then was stirred up, when still a youth (puer), to devote himself to the evangelisation of Ireland. According to Secundinus's Hymn (St. Sechnall), which is probably not much later than the age of St. Patrick himself, the saint received his apostleship "from God," like St. Paul. No reference is made in that hymn, or in the later so-called Hymn of St. Fiacc, to any commission received from Pope Celestine, as is asserted by later writers. St. Patrick does not in his own writings allude to the external source whence he obtained ordination, and, as he speaks of his Roman descent, it would be strange for him not to have mentioned his Roman consecration, if it had been a fact.

From some “sayings" of his, preserved on a separate page of the Book of Armagh, it is probable that he travelled through Gaul and Italy, and that he was ordained in Gaul as deacon, priest, and, afterwards, as bishop. He was probably a bishop when he commenced his missionary labours in Ireland. There were, however, Christians in Ireland before that period. Palladius, the senior Patrick, who preceded our saint by a few years, was, according to the chronicle of Prosper (the secretary of Pope Celestine), "ordained and sent to the Scots (the Irish) believing in Christ, by Pope Celestine, as their first bishop." Palladius's mission was a failure, while that of the second Patrick, which was quite independent of the former, was successful in a high degree. Its success, however, has been greatly exaggerated; for St. Patrick, in the close of his Confession, or autobiography, written in old age, speaks of the high probability of his having to lay down his life as a martyr for Christ. The date of St. Patrick's mission is not certain, but the internal evidence of his writings indicate that it was most probably about A.D. 425. The day and month of his death (March 17), but not the year [466] is mentioned in the Book of Armagh.

St. Patrick's claim to a record in this Dictionary is associated with the celebrated hymn or “Breastplate," a history of which we now subjoin.
1. St. Patrick's Irish Hymn is referred to in Tirechan's Collections (A.D. 690). It was directed to be sung in "all monasteries and churches through the whole of Ireland," "canticum ejus scotticum semper canere," which is a proof that it was at that time universally acknowledged to be his composition. That regulation was very naturally lost sight of when the old Celtic Church lapsed into the Roman, (a) The expressions used in the hymn correspond entirely with the circumstances under which St. Patrick visited Tara. (b) Moreover, although all the ancient biographies of St. Patrick (with the exception of his own Confession, and of Secundinus's Hymn) speak of him as a worker of miracles, and as having performed miracles at Tara, there is no trace of such a fact in St. Patrick's Hymn, (c) Further, the phrase, "creator of doom," which twice occurs in it, according to the most approved translation, curiously corresponds with another fact that, "my God's doom," or “the doom," or "judgment of my God," was, according to the ancient biographies, one of St. Patrick's favourite expressions.
2. The first notice of the existence at the present time of an ancient manuscript copy of St. Patrick's "Hymn or Breastplate," was made known by the late Dr. Petrie in his Memoir of Tara, published in the Transactions of the Royal Irish Academy, 1839, vol. xviii. Dr. Petrie gave the original in Irish characters, an interlineary Latin version and an English translation by himself, together with copious notes. Dr. Petrie found the original in the Liber Hymnorum, in the Library of Trinity College, Dublin (iv. E. 4, 2, fol. 19 b). “The tradition respecting its primary use by the saint is that he recited it on Easter Sunday, when proceeding to encounter the droidical fire-worshippers, with their pagan king, Laoghaire, and his court, at Tara, the royal residence." (Lyra Hibernica Sacra, 1878, p. 2.)
3. Dr. Todd in his work, S. Patrick, Apostle of Ireland, 1864, gives a metrical rendering of the “Breastplate” which begins:—

The translation, which extends to 78 lines, was mainly the work of Dr. Whitley Stokes. A more correct version by the same scholar is given in the Rolls's edition of the Tripartite Life, 1887; and that revised version, with a few modifications, accompanied with critical notes, explanatory of the alterations made on the former version, is given in the 2nd and 3rd editions of the Writings of St. Patrick, by Dr. V. H. H. Wright. Dr. Whitley Stokes, therefore, is to be regarded as the real translator from the original Irish. Dr. Petrie's translation, though highly meritorious as a first attempt, has been proved in many particulars to be erroneous. There is no mention of Tara in the hymn. An uncertainty yet exists as to the meaning of a few words.
4. In Dr. W. MacIlwaine's Lyra Hibernica Sacra, 1878, Dr. Todd's translation was repeated (with notes), together with a second translation by James Clarence Mangan, the opening lines of which are:—

"At Tara to-day, in this awful hour,
I call on the Holy Trinity!
Glory to Him Who reigneth in power,
The God of the elements, Father, and Son,
And Paraclete Spirit, which Three are the One,
The everlasting Divinity."

5. A popular version of the hymn for congregational use was written by Mrs. Cecil F. Alexander, for St. Patrick's Day, 1889, and sung generally throughout Ireland on that day. The opening lines are:—

"I bind unto myself to-day
The strong Name of the Trinity,
By invocation of the same,
The Three in One and One in Three.
”I bind this day to me for ever,
By power of faith, Christ's Incarnation;
His baptism in Jordan river;
His death on Cross for my salvation;
His bursting from the spiced tomb;
His riding up the heav'nly way;
His coming at the day of doom;
I bind unto myself to-day."

Mrs. Alexander's version is given, along with that of James Clarence Mangan, in the Appendix to the Writinqs of St. Patrick, edited by Dr. C. H. H. Wright (R.T.S.), 1889.
6. Another metrical version of this hymn was given in the Irish Ecclesiastical Gazette for April 5, 1889. It is by Joseph John Murphy, and the opening lines are:—

"I bind as armour on my breast
The Threefold Name whereon I call,
Of Father, Son, and Spirit blest,
The Maker and the Judge of all."

7. The translation in Stokes and Wright's edition of St. Patrick's writings was set to music as a cantata by Sir R. Stewart, and was performed for the first time in St. Patrick's Cathedral, Dublin, on St. Patrick's Day, 1888.
8. Mr. Thomas French, Assistant Librarian of Trinity College, Dublin, writes as follows respecting this hymn:—

"The manuscript called the 'Liber Hymnorum' belonged to Archbishop Ussher, and forms one of the volumes of the Ussher Collection now in the Library of Trinity College, Dublin. There is no interlineary Latin translation in the original. It was given by Petrie in his account of the hymn 'for the satisfaction of the learned’ [The St. Patrick authorship is tradition only, so far as I know.] Dr. Todd in his S. Patrick, Apostle of Ireland, p. 426, says ‘It is undoubtedly of great antiquity, although it may now be difficult, if not impossible, to adduce proof in support of the tradition that St. Patrick was its author.'...... Petrie and Todd make the age of the manuscript 9th or 10th century, Whitley Stokes 11th or 12th."

"Father, Son, and Holy Ghost!
May Thine overshadowing might
Be as armour to my soul,
Be my weapon in the fight."