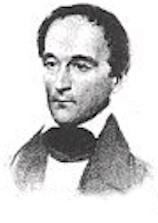 Peabody, William Bourne Oliver, D.D., twin brother of Oliver William Bourne, was born at Exeter, New Hampshire, July 9, 1799, and educated in his native town and at Harvard College. Leaving Harvard in 1817, he taught for a year at an academy in Exeter, and then proceeded to study theology at the Cambridge Divinity School. He began to preach in 1819, and became the Pastor of the Unitarian Congregation at Springfield, Massachusetts, in October, 1820. This charge he held to his death on May 28, 1847. His Memoir (written by his brother) was published with the 2nd ed. of his Sermons, 1849; and his Literary Remains followed in 1850. "He was a man of rare accomplishments, and consummate virtue," whose loveliness of character impressed many outside his own sect. In 1823 he published a Poetical Catechism for the Young to which were appended some original hymns. He also edited The Springfield Collection of Hymns for Sacred Worship, Springfield, 1835. A few of his hymns also appeared in that collection. His hymns in common use are:—

1. Behold the western evening light. Death of the Righteous, or Autumn Evening. Published in his Catechism, 1823, in 6 st. of 4 1., and again in his Springfield Collection, 1835, No. 484. It is in common use in its original form; also as altered in the Leeds Hymn Book, 1853; and again as altered by George Rawson in the Baptist Psalsm & Hymns, 1858, where it reads "How softly on the western hills."
2. God of the earth's extended plains. Hymn of Nature. This is in Griswold's Poets and Poetry of America, in 6 st. of 8 1. This is thought by some to be the production of his brother Oliver; but Putnam assigns it to William. It is given abbrevi¬ated in a few collections. The hymn "God of the rolling orbs above," in the Boston Unitarian Hymns [and Tune"] Book, 1868, and others, begins with st. v.
3. 0 when the hours of life are past. The Hereafter. This hymn, in 6 st. of 4 1., was given in his Catechism, 1823, as the Answer to "Question xiv. What do you learn of the Future State of Happiness." It is in use in its original form, and also altered as "When all the hours of life are past."
4. The moon is up: how calm and slow. Evening. A poem rather than a hymn, in 6 st. of 4 1., appended to his Catechism, 1823.
5. When brighter suns and milder skies. Spring. Appended to his Catechism, 1823, in 6 st. of 4 1.
The full texts of all these hymns are in Putnam's Singers and Songs of the Liberal Faith, Boston, U. S. A., 1875. [Rev. F. M. Bird, M.A.]