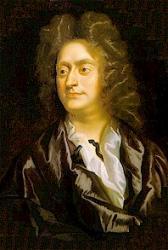 Henry Purcell (b. Westminster, London, England, 1659; d. Westminster, 1695), was perhaps the greatest English composer who ever lived, though he only lived to the age of thirty-six. Purcell's first piece was published at age eight when he was also a chorister in the Chapel Royal. When his voice changed in 1673, he was appointed assistant to John Hingston, who built chamber organs and maintained the king's instruments. In 1674 Purcell began tuning the Westminster Abbey organ and was paid to copy organ music. Given the position of composer for the violins in 1677, he also became organist at Westminster Abbey in 1679 (at age twenty) and succeeded Hingston as maintainer of the king's instruments (1683). Purcell composed music for the theater (Dido and Aeneas, c. 1689) and for keyboards, provided music for royal coronations and other ceremonies, and wrote a substantial body of church music, including eighteen full anthems and fifty-six verse anthems.