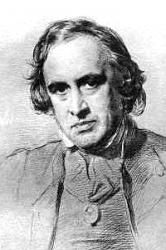 Trench, Richard Chenevix, D.D. was born in North Frederick Street, Dublin, on Sept. 9th, 1807, during a visit of his parents of some mouths to Ireland. His father was Richard Trench, 6th son of Frederick Trench, of Woodlands, Co. Galway; his mother Melesina, only grandchild and heiress of Richard Chenevix, Bishop of Waterford, and widow of Colonel St. George. On his mother's side he was almost purely French, the grandfather of Bishop Chenevix of Waterford, Philip Chenevix of d'Eply of Loraine having only taken refuge in England on the revocation of the Edict of Nantes. The Huguenot refugee families married for a long time within themselves, and in Mrs. Richard Trench, four distinct foreign strains were blended. Her sons (the Archbishop and his brothers, besides his two sisters) were the only descendants of the Refugee Philip, either in the male or female line, all the other branches having come to an end. Trench's home in childhood was Elm Lodge, close to the village of Bursledon, not far from Southampton. In February, 1816 he proceeded to Twyford School, and in 1819 to Harrow, where he won great distinction. In October 1825 he was entered at Trinity College, Cambridge. His mother's correspondence is full of references to a little periodical called The Translator, begun in 1825, or immediately on his becoming an undergraduate. She was his ardent co-worker both as contributor and critic. In 1826 he had acquired Spanish, and in that year applied himself to preparing and publishing a volume of Miscellanies, of which the "profits were to be sent to the committee formed for the relief of the exiled Spaniards." On May 27th, 1827, his mother died at Malvern. The Letters and Memorials (1888) give vivid and exciting details of his continuous interest and daring personal service and sacrifices on behalf of Spain. It was during the winter days of 1829-30 that the consultations and schemes respecting Spain were discussed in John Sterling's apartment. Robert Boyd, Trench's cousin, threw himself and his entire fortune into the plot by purchasing a small ship in the Thames and storing it with arms, in which General Torrijos and fifty picked Spaniards were to sail for the new adventure of the Golden Fleece. The enterprise ended tragically. Boyd and others perished by the inevitable vengeance of the Spanish sovereign when captured. By the hand of God, Trench was safe in Gibraltar.

Till far up in young manhood he was undecided as to his calling, Law rather than Divinity colouring his thoughts and plans. He left Cambridge on February 1st, 1829, and rejoined his widowed father at Elm Lodge, near Southampton. He married, at the Abbey Church, Bath, on May 31st, 1832, his own cousin, Frances Mary Trench, daughter of his uncle, Francis Trench (2nd son of Frederick Trench, of Woodlawn, co. Galway, Ireland, and next brother to the 1st Lord Ashtown). On October 7th, 1832, he received Deacon's Orders in Norwich Cathedral at the hands of the aged Bishop Bathurst of Norwich. His first curacy was at Hadleigh, Norfolk, with H. J. Rose. He was ordained priest early in July, 1835, by Bishop Sumner, of Winchester. He published in 1835 The Story of Justin Martyr, and other Poems (Moxon). This was (practically) his first book. In 1838 followed Sabbation, Honor Neale, and other Poems, with Notes. In 1840 appeared his first prose work, Notes on the Parables of our Lord, subsequently companioned with Notes on the Miracles of our Lord (1846). In 1841 "the loving discipline of pain" visited his heart and hearth by the death of his eldest born, a deep sorrow which gave its subtlest and finest inspiration to his Elegiac Poems. A third volume of poetry, Poems from Eastern Sources, the Steadfast Prince, and other Poems, was published early in 1842; and a fourth, Genoveva, later in the same year. Early in 1843 he delivered his Five Sermons before the University of Cambridge, published in 1844. In 1844 also was published Exposition of the Sermon on the Mount, drawn from the Writings of St. Augustine, with Observations. In this same year he became Vicar of Itchen Stoke.

In 1845 he delivered a lecture "On Language as an instrument of Knowledge," which expanded into his famous and suggestive Study of Words. In 1846 he was appointed Professor of Divinity at King's College, London, later changed into "Professor of the Exegesis of the New Testament,” which he held until 1858. The friendship between Trench and Maurice here was very beautiful. In 1846 also came the Hulsean Lectures, their subject being Christ "the Desire of all Nations." In 1849 appeared his Sacred Latin Poetry. This is an inestimable book. In 1852, Lessons on Proverbs and Study of Words, and in 1855 English Past and Present appeared. His Synonyms of the New Testament (1854) was a permanent contribution and inspiration to Philology and Theology. Life's Dream: the Great Theatre of the World, from the Spanish of Calderon, with an Essay on his Life and Genius, was published in 1856; 2nd ed. in 1880. The Crimean war drew from him his finest verse, Poems written during the Russian War (1854-55). In 1856 he was appointed Dean of Westminster. In 1861 was published his Commentary on the Epistles to the Seven Churches in Asia. On New Year's Day, 1864, he was consecrated Archbishop of Dublin in Christ Church Cathedral. He instantly took a foremost place in the regard of the entire community. His published Sermons, including his Studies on the Gospels (1867), are amongst the most thoughtful and quietly eloquent in our language; as are his Lectures on Plutarch (1873), and others. Timolem (1881) was his last poem. His final confirmation was in St. Bartholomew's Church on May 16th, 1884. On November 28th, 1884, he resigned his Archbishopric. He died in London, March 28, 1886. Few have left behind them a more stainless, a more loveable, a more enviable memory. He was sweetness and light embodied. [Rev. A. B. Grosart, D.D., LL.D]