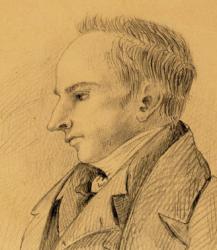 Chrétien Urhan (Baptised as Christian Urhan; 16 February 1790, Montjoie - 2 November 1845, Belleville) was a French violinist, organist, composer and player of the viola and the viola d'amore.

His father first introduced him to the violin. He was first mentioned in 1804 by Joséphine de Beauharnais that he had replaced a violinist for a performance of Haydn's The Creation, at the young age of 14. From there he was sent to work in Paris, where he took instruction from Jean-François Lesueur, master of the chapel of the Tuileries. He also learned from prominent teachers such as François-Antoine Habeneck, Rodolphe Kreutzer and Pierre Rode. He was invited to join the imperial chapel as a violinist in 1810.

In this period the young Urhan shared lodgings with his friends the harpist Franz Anton Stockhausen (father of Julius Stockhausen) and the painter Carl Begas the elder (who was studying with Antoine Jean Gros, 1813-15). In 1815, through a Quartermaster in the Prussian army of occupation, Urhan and Stockhausen (who corresponded with Beethoven) obtained a score of Beethoven's Eroica Symphony and set it before Habeneck, with the result that the work was introduced to Paris. The two were among Amis de Beethoven, or Beethoven-Bruder in Paris, together with Wilhelm Mangold and others. In the early 1820s the violinist Sina, a member of the string quartet led by Schuppanzigh for Andreas Razumovsky, with Urhan gave new encouragement to Habeneck to continue with the master's works. Until Stockhausen's marriage to the singer Margarethe Schmuck, a member of their circle, in 1825, he lived with Urhan, who remained a lifelong friend.

In 1816, Urhan was appointed solo viola at the Opéra de Paris, and became solo violinist in 1825. Strongly Catholic, he was also appointed the organist at the Church of Saint-Vincent-de-Paul in Paris in 1827, a position that he held until his death. In this position he met the young Franz Liszt, with whom he played chamber music, and also the Beethoven Kreutzer Sonata in a mass. A number of composers wrote prominent parts for Urhan. Meyerbeer composed for him solo viola and solo viola d'amore parts in his opera Les Huguenots, and Rudolph Kreutzer, the solo viola d'amore part in his opera Le Paradis de Mahomet. In 1834, Berlioz wrote his Harold en Italie for orchestra with viola obbligato at the request of Niccolò Paganini, who refused to play the work. Berlioz offered the solo viola part to Urhan and the premiere was given on 23 November 1834 at the Paris Conservatory.

According to Ernest Legouvé, he was both entirely religious and entirely devoted to music. He lived like a medieval ascetic, abstaining from almost everything except his daily visit to the Café des Anglais. His love for theatre music created a severe inner conflict, which he overcame by asking the permission of the Archbishop to play in the orchestra of the Opéra (of which he was Leader), being told it was a matter for his own conscience. He accepted this by always being seated with his back to the stage, so that he never saw the singers or dancers for whom he played, even when providing solo accompaniment for a dancer.

Legouvé thought there were several greater violin virtuousi in Paris than Urhan, but that he outshone them through his profound knowledge of the masters and respect for their music, and through the indefinable quality of style which he brought to them. He often differed with Habeneck, when the conductor wanted to make cuts, and actually published and signed an article against Habeneck when he withdrew some double-basses from Beethoven's Choral Symphony. He did not merely guard the reputation of the old masters, but he was also a fierce advocate and defender of the new, and of those of the future. He was the first to introduce a song of Schubert's into France ('L'Adieu'). For Legouvé, to see him play was like watching Fra Angelico painting in his cell, a medieval mystic at work.

The Stockhausens visited Urhan in his fifth-floor Paris apartment in 1839, and found him living in great simplicity in two rooms, with a piano and five stools in his bedroom, where they sat and were made very welcome. In 1843 Urhan encouraged their son Julius while he was in Paris. In November 1845 Julius wrote to inform his parents of Urhan's death. He had been living in pitiable conditions in Belleville, and began to refuse his food: thoughts of suicide made him resolve to starve himself to death. He suffered agonies of pain and descended into a frenzy, giving terrible grief to his friends, none of whom could talk him out of it. All interventions failed, and Urhan, whom the Stockhausen and Legentil families considered their dear friend, and who had formerly taken communion every Sunday, lost his faith in God and his desire for life. Thus he died, quietly at last with friends at his bedside, on 2 November 1845.