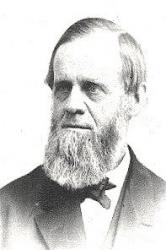 Wolcott, Samuel, D.D., was born at South Windsor, Connecticut, July 2, 1813, and educated at Yale College, 1833, and Andover Theological Seminary, 1837. From 1840 to 1842 he was a missionary in Syria. On his return to America he was successively pastor of several Congregational congregations, including Belchestown, Massachusetts; Providence, Rhode Island; Chicago, &c. He was also for some time Secretary of the Ohio Home Missionary Society. He died at Longmeadow, Massachusetts, Feb. 24, 1886. His hymnwriting began late in life, but has extended to more than 200 hymns, many of which are still in manuscript. Those of his hymns which have come into common use include:—
1. All thy realms in midnight shrouded. Mission. In the Oberlin Manual of Praise, 1880.
2. Christ for the world we sing. Missions. Written Feb. 7, 1869. Its origin is thus recorded by the author: "The Young Men's Christian Associations of Ohio met in one of our Churches, with their motto, in evergreen letters over the pulpit, ‘Christ for the World, and the World for Christ.' This suggested the hymn 'Christ for the world we sing.'" It was when on his way home from that service that he composed the hymn. It is in several American collections, including Laudes Domini, 1884, &c.
3. Father, I own Thy voice. Trust and Aspiration. This, his first hymn, was written in 1868, more as an experiment in hymn-writing than anything else. It was published in the Rev. Darius E. Jones's Songs for the New Life. Chicago, 1869. It has since passed into other collections.
4. Goodly were thy tents, 0 Israel. Missions. Written May 31, 1881, and included in Laudes Domini, 1884.
5. Lo! the faith which crossed the ocean. Missions. In the Oberlin Manual of Praise, 1880.
6. O gracious Redeemer! O Jesus our Lord. The Love of Jesus. Written in 1881.
7. On the works of His creation, God the Creator.
In the Ohio Evangelical Association's Hymn Book, 1881.
8. Pitying Saviour, look with blessing. Prayer for the Penitent. In the Ohio Evangelical Association's Hymn Book, 1881.
9. Tell me Whom my soul doth love. Opening of Divine Service. A paraphrase of Cant. i. 8. Written Feb. 6, 1870. Included in Laudes Domini, N. Y., 1884.
10. To us have distant ages. Saints Days. In Dale's English Hymn Book, 1874.
11. This house, most holy Lord, is Thine. Opening of a Place of Worship. In Dale's English Hymn Book, 1874.
For most of the information given above we are indebted to Duffield's English Hymns, N. Y., 1886.