A Child is Born, the Birth Proclaim 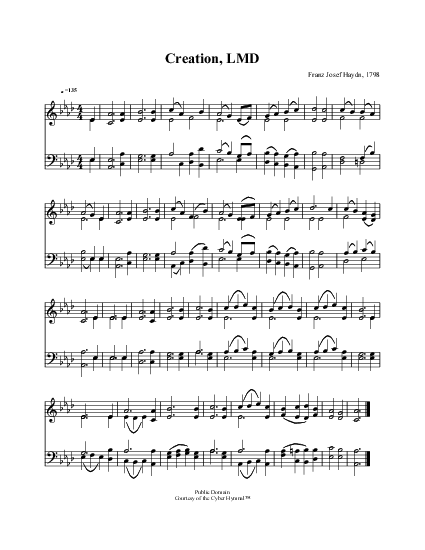 A child is born, the birth proclaim

A child is born,--the birth proclaim,
A son is given,--declare his name;
Messiah, from the Fall foretold,
The Deity in human mould;
--That mould from which, God's image lost
In Eden at so dire a cost,
The new creation shall restore,
And guilt efface its lines no more.


Hail! to His rising from afar,
He is the bright and morning star;
His healing beams, ye nations, bless,
He is the Sun of Righteousness
To save His people from their sins,
Jesus His suffering life begins;
Ere long as Christ our sacrifice,
The Holy and the Just One dies.


Again His glorious name record,
As David's Son and David's Lord;
He mounts the mediatorial throne,
To claim earth's kingdoms for his own:
Him every eye again shall see
Descend in power and majesty,
His ransom'd in the clouds to meet,
And put all foes beneath his feet.

The tune CREATION is taken from the chorus “The Heavens Are Telling” from the well known oratorio The Creation (1798) by Franz Joseph Haydn (b. Rohrau, Austria, 1732; d. Vienna, Austria, 1809). Haydn's life was relatively uneventful, but his artistic legacy was truly astounding. He began his mus…

All tunes published with 'A Child is Born, the Birth Proclaim'^ top