A little while! so quickly flee earth's shadows 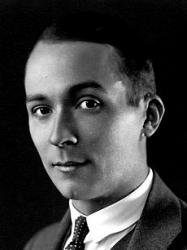 Born: March 2, 1892, San Francisco, California. Pseudonym: Jean Howard. Gabriel was living with his parents in Cook County, Illinois, in 1910. He was still there in 1920 with his wife Ethel. In 1926, he was musical director and announcer for radio station KLX in Oakland, California. By 1930, he and his wife were in Los Angeles County, California. The January 30, 1926 issue of Colliers magazine said of him: "Gabe" has experienced all those changes which the Fates deem necessary to broaden one’s views. He has taught music in the Indianapolis [Indiana] and Northwestern Conservatories; edited mechanical and automobile magazines; traveled with Billy Sunday; been a newspaper reporter; rewrite man; music editor and book reviewer.… Go to person page >
^ top

[A little while! so quickly flee earth's shadows]

All tunes published with 'A Little While'^ top

Inspiring Gospel Solos and Duets No. 1 #10