A palace is the sinner's heart 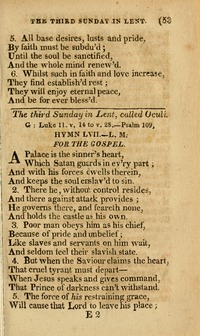 A palace is the sinner's heart

1 A Palace is the sinner's heart,
Which Satan guards in ev'ry part;
And with his forces dwells therein,
And keeps the soul enslav'd to sin.


2 There he, without control resides,
And there against attack provides;
He governs there, and feareth none,
And holds the castle as his own.


3 Poor man obeys him as his chief,
Because of pride and unbelief;
Like slaves and servants on him wait,
And seldom feel their slavish state.


4 But when the Saviour claims the heart,
That cruel tyrant must depart--
When Jesus speaks and gives command,
That Prince of darkness can't withstand.


5 The force of his restraining grace,
Will cause that Lord to leave his place;
Some outward changes may be seen,
But yet some idol lurks within.


6 Altho' he wanders for a while,
Himself he can not reconcile,
He has not fully quit his home,
But soon he means again to come.


7 Where Jesus does not fully reign,
He surely will return again:
With vice and envy seven-fold,
Audatious, impudent and bold.


8 His palace he no more forsak's,
In spite of all reproofs and checks;
The force of men and angels join'd,
Can ne'er renew that hard'ned mind.


9 That sinners' case was bad before,
But now 'tis worse, and still much more:
Because he can not be renew'd,
And ever hat'st the ways of God.


10 O! horrid, wretched, awful state,
My God let it not be my fate;
May the Good spirit gain my heart!
To dwell in me and ne'er depart.

Source: Church Hymn Book: consisting of newly composed hymns with the addition of hymns and psalms, from other authors, carefully adapted for the use of public worship, and many other occasions (1st ed.) #LVII

Church Hymn Book; consisting of hymns and psalms, original and selected. adapted to public worship and many other occasions. 2nd ed. #116