A Shout Rings Out, A Joyful Voice 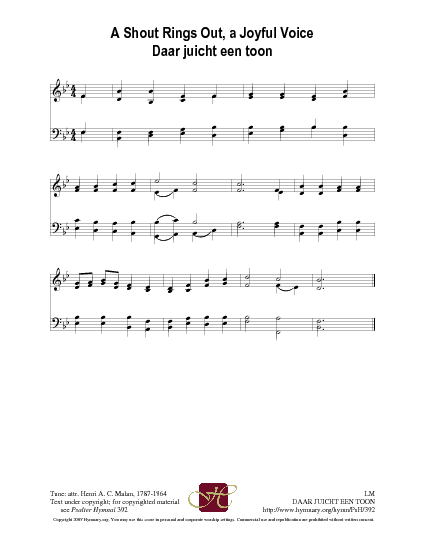 Eduard Gerdes (b. KIeef, the Netherlands, 1821; d. Doetichem, the Netherlands, 1898) wrote the Dutch text of this Easter carol ("Daar juicht een toon"). Text and tune were published in numerous editions of the Dutch Zangbundel, a hymnal compiled by Johannes De Heer and used in homes but never adopted by any Dutch Reformed denomination. Dutch immigrants who came to North America after World War II brought this song with them (see also 214). The text is a testimonial, a witness to the meaning of Easter: Christ Jesus has risen victoriously from the grave in triumph over death and hell (st. 1-3a); believers may claim Christ's victory now and forever (st. 3b-4).

Evangelist, journalist, educational author, and hymn writer, Gerdes was an untiring worker for the church. His main vocation was as a preacher in evangelistic services, both among the laboring classes in Amsterdam and among the peat farmers in northern Holland. Born into a Lutheran home, Gerdes worked in Baptist as well as in Dutch Reformed Secessionist congregations. His writings include books on the study of foreign languages, stories for children, evangelistic tracts, and a number of hymns. His most popular hymn was "Er mist langs de wolken" (1857), a Christmas hymn included by Canadian Leendert Kooi in 50 Favorite Dutch Hymns (1986); the composite English translation there begins "There Rings Through the Clouds."

Liturgical Use:
Easter season, but especially on Easter Sunday.

All tunes published with 'A Shout Rings Out, A Joyful Voice '^ top